Our Culture is Losing its Bible Heritage

The most popular post of all time on this blog isn’t about marriage. Or sex. Or family at all. It’s actually my list of the 50 most important Bible verses to memorize. (If you’ve ever wanted to start memorizing Scripture, but you don’t know where to start, this is a great place!)

Anyway, recently someone landed on that page and then started clicking links and found an older post on our culture’s biblical heritage, which I wrote five years ago and forgot about. I just reread it, and I thought it was worth posting so that my new readers can see it. So here we are, from 2008:

What Do We Hide in Our Heart?

While homeschooling my oldest daughter recently, I came across a Grammar Lesson that caught me by surprise. We use an old 1920 Ontario textbook for grammar, largely because they  understood how to teach basic skills back then. This particular assignment asked children to plan a five paragraph story, and then to write it, on one of the four following subjects: David and Goliath; Daniel and the Lions; Ruth and Naomi; or the Prodigal Son.

What was surprising to me was not that a public school textbook, even one that is 88 years old, would ask children to write Bible stories. It was that the textbook assumed the children could. You see, the Bible was not just part of Canada’s faith story back then; it was part of our whole culture. Whether or not people believed it, everybody knew it.

Philosopher and physician John Patrick likes to tell a story that illustrates this to an even greater extreme. The scene is the disastrous Canadian landing at Dieppe, in France in 1942. The Canadians had no air or sea support, they were outnumbered, and it was a lost cause perhaps before it even began. In the midst of the battle, the English headquarters sent a message across the Channel, asking how the soldiers were faring. They received a three word answer in response. “But if not.” 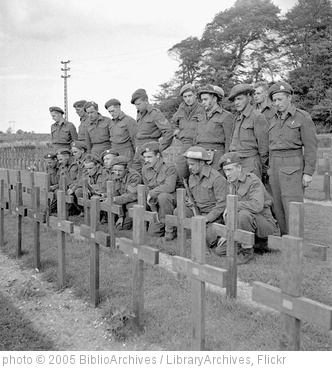 For those of you who are still scratching your heads, “But if not” is from the story of Hananiah, Mishael, and Azariah, better known as Shadrach, Meschach and Abednego, or to my children as Rack, Shack and Benny. When facing being thrown into the fiery furnace for refusing to bow down to an image of the Babylonian King Nebuchadnezzar, these three men told the king, “If our God is able to deliver us, let him. But if not, we will not bend the knee.” But if not, we will not bend the knee. That is the message the Canadians sent back to London. It was read, and it was understood.

There’s another story from that same period that speaks to me. An Allied POW camp (I assume it was air force or some such, because they were held for a number of years, so it must have been before D-Day), managed to recreate pretty much the entire book of Matthew (there were only a few holes) just from people’s memories. I can’t find a reference for that now, but I think that’s pretty inspiring. They wanted Scripture to keep them going, so they called everyone together, and everyone brainstormed, wrote out the verses they knew, and then tried to put them in the proper order. The chaplain kept what they wrote, and he compared it to the actual Bible when they were released. They got remarkably close. I can’t picture that happening today.

Not all of those people were Christian, in either story. And yet they knew the Word. Probably better than we do. Have any of you ever read Tom Sawyer? Mark Twain writes brilliantly and hysterically about the Bible verse drills all these kids went through, but that was late in the nineteenth century.

Do we memorize anymore?

Do we really know our Bibles? Do our kids? I think we need to get back to knowing the Word.

I know we can’t turn back the clock, and likely the rest of society won’t follow us as they did when we were still a Bible-based culture, but we need to at least be well versed in Scripture. In fact, we need to be more well-versed because we no longer hear Scripture or allusions to Scripture in normal life.

What do you think?

After all, but if not…