Wifey Wednesday: Do You Need Controls/Filters on Your Computer?

Today I want to talk about internet accountability.

And what about our kids? When they’re starting to get sexual feelings, it’s asking an awful lot of them to refrain from checking things out on the internet. 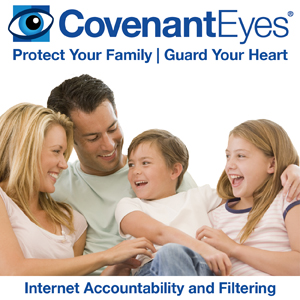 Stop Temptation Before It Starts with Covenant Eyes

You install the program, and then someone you trust receives a report of all the websites you visit. Voila! Temptation gone.

Covenant Eyes Internet Accountability tracks every site you visit, rates each one for its content using six age-based ratings, (such as T for Teen or M for Mature) and delivers a regular report to the friend you choose.

The best part about this? You do not have to be your husband’s accountability partner! If he slips up, he knows he’ll be talking to another guy about it. But you can let it go and trust that this guy will follow up so that you don’t have to.

It’s not healthy to serve as his accountability partner, anyway, so this way someone who doesn’t even live in the same house can still help your husband avoid temptation.

The easy-to-read reports can be customized so your accountability partner isn’t overwhelmed having to scroll through mountains of data. It can report only when you visit sites ranked Highly Mature, for instance.

Covenant Eyes also rates and reports web searches, such those done in Google, Bing, and other search engines, and keeps track of YouTube videos (and other videos) watched, too.

Covenant Eyes can also be installed on iPads, iPhones, iPods (great for teens!), and even Android devices. And these apps are free when you subscribe to Internet Accountability on your computer. Learn more about Accountability for mobile devices.

For $1.50 more, add Internet filtering to your Windows computers for added protection.

Try it today for one month free!

Covenant Eyes Accountability starts at $8.99/month, but Covenant Eyes is offering it to readers of To Love, Honor and Vacuum free for the first 30 days when you sign up using the promocode tlhv.

Seriously, this isn’t something we should just let be. I’ve heard people say things like, “you have to trust people. And everyone needs to learn to withstand temptation.” Or “one day your kids will move out and they’ll have to stand on their own two feet, so don’t shelter them too much now.” I do understand that line of thinking. But we wouldn’t lead a teenage boy into a strip club and say, “remember, you’re only here for the chicken wings. Just don’t look at anything.” I think we forget how strong a temptation this can honestly be. And if there’s a tool that will help people avoid temptation–when the ramifications of not doing so are so great–why would you not take it?

Talk to your husband about this. Talk to your kids about this. Maybe it’s time ALL of you got accountable. Not just the men, but we women, too. I think it’s a great tool, and as a wife and the mother of teenagers, I endorse it wholeheartedly.

I get so many heartbreaking emails, and I want the problem to stop. I think this is one tool we have in our arsenal, and I hope that many of you will take me up on it!

Now, what do you have to share with us today about marriage? Link up a marriage post in the linky below, and be sure to share the link back here so other people can read great marriage posts, too. And you can copy my button code from the sidebar!