Empowering Women the World Over–Do We Know How Good We've Got It? 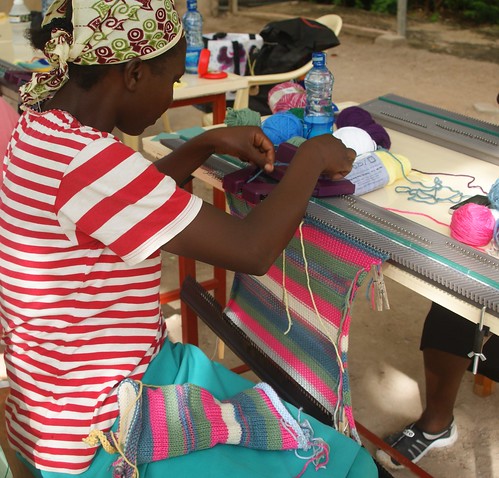 Some of the greatest highlights of my life will always be the missions trips that our family has taken to the Mulli Children’s Family in Africa. It’s a home for orphaned, neglected and abused children–about 1000 of them at a time. A wonderful and awe-inspiring facility, MCF provides first-class education on site from kindergarten through high school (many of their graduates receive scholarships to university), and job training for teen mothers whom they rescue from the street.

The first time we went my youngest daughter was 9 and my oldest 11. We’ve been twice since then, and we’ll be returning the summer of 2014. While my husband leads a team of medical volunteers, my mother and I instead have worked with many of the teens and some of the entrepreneurial women onsite, helping them learn to use knitting machines. I know it’s hard to believe, but it actually does get chilly in Africa at night, and sweaters and ponchos are highly desirable items. Yet while there’s quite the indigenous sewing industry, knitting hasn’t been adopted yet. So setting up a knitting business can actually provide a good source of income. 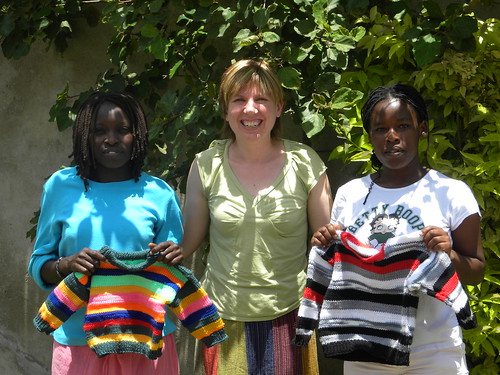 Another side to the coin is that every time we go my mother and I plunk down quite a bit of money at several markets in Nairobi, buying soapstone carvings and woven items and especially handmade jewelry off of the women who make a living selling there. Then we bring it back here and sell it to raise money. It’s a great fundraiser, but what makes me even happier than sending the money back to MCF is the look on the women’s faces at the market when we choose their stall to buy from. They’re grateful and they’re proud. They made the items themselves, and they’re being paid for honest work. We value what they have done.

That’s part of what I appreciate about MCF, too. It’s trying to be sustainable. They have a huge farm that supplies the food they need, but also supplies income since they export vegetables to Europe. They have fisheries. They have tree nurseries. They’re building a university. And they’re teaching the kids to support themselves, not to rely on charity.

The way to empower people isn’t just to hand money–it’s to help people make an income and create a future for themselves.

And many of the girls who need such a future are girls who have been horribly abused. I’m reminded of the story of one particular girl, whom I’ll call Anna, who was rescued out of a jail for teenage girls (yes, there are such things, and yes, the guards do abuse the girls). In Kenya if you’re caught on the street, homeless, and you’re a minor, you’re frequently arrested just for being homeless. And why was she homeless? She had been orphaned, and her aunts decided that she could make them a decent income if they sold her into prostitution at the age of 11. After being abused multiple times she ran away, and ended up being abused on the street.

Now she’s finished high school and is headed for university.

We met another family of three little girls who were rescued when they were 10, 4 and 2. Their parents had died a year before that, and the extended family had come and taken all the furniture out of the home, leaving the 10-year-old to try to feed her little sisters. Today they’re thriving. And the youngest one is a really good knitter! (I taught her myself on our first trip there, and she still knits even six years later! 🙂

It breaks my heart the things that some girls and women go through in other parts of the world. I know that women are abused here, too, but we do have a support system. There they don’t. You literally have nowhere to turn.

And so programs that help empower women, so that they won’t fall prey to men who would use them, and so that they can create a future for themselves and their children, are very near and dear to my heart.

So it’s neat that even large corporations are starting to jump on the bandwagon and try not just to give charity money to Africa, but to empower women so that they can help themselves. Wal-Mart has just launched their Empowering Women Together campaign, and asked me to tell you about it. I agreed because I want to keep encouraging companies to start buying product from female entrepreneurs. (It’s not that I don’t like male entrepreneurs, by the way; it’s just that so many women are desperate in the Third World, and they have no other options open to them except starting a small business if they want to remain off the street. Because so many women are supporting children, even children of rape, I want to see that they are given a real hand up–not a hand out).

You can see more about the campaign on their Pinterest board, but here’s a video that explains what they’re doing in Rwanda. I love it because the Rwandan enterprise, Gahaya Links, which now involves over 4,000 women, is Christian-owned and operated. Take a look:

I have seen a similar operation in Kenya, making jewelry that is sold all over North America now. My mother has toured the factory, and she was so impressed. This is the kind of thing that gives me goosebumps–to see women in complete poverty succeed because they join together, enlist God’s help, and step forward in faith that He will provide a way for them to support their children.

So now Wal-Mart is launching this online initiative that will allow people to buy unique gifts and unique items that come from women-owned businesses worldwide. That way, when you need to buy something for a friend or a family member, you can buy something that will be different, unique, and will spread real blessing.

Because Wal-Mart is so big, they can give access to large markets for some of these businesses to women who would never otherwise be able to attain it. Wal-Mart has a five-year commitment to source $20 billion in merchandise from women-owned businesses worldwide. At its launch, Empowering Women Together will feature 200 items from 19 countries, including jewelry from Rwanda and Kenya (yay!), home accessories from Rwanda and Haiti, paper mache from Haiti, iPad and laptop cases from Cambodia and Nepal, and more. (They even have dark chocolate!). Again, you can see them here.

We spend a lot of time griping about big business, and so I think it’s also good to give credit where credit is due. And I’m thrilled to see a large corporation take the power that they have built up and push it in a really positive direction. I hope this works out well for them, and more importantly, really well for the women who are being lifted out of poverty the world over.