What Do You and Your Husband Have in Common? 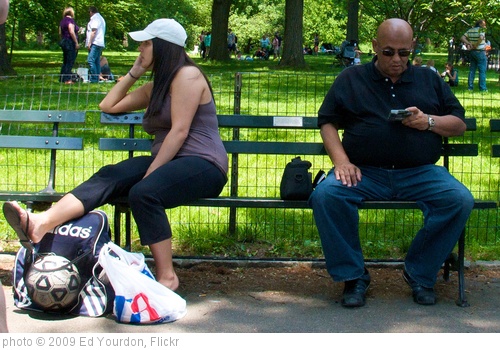 Christmas is the time of goodwill and joy and cheer, and yet I know for many people it’s also a vivid reminder that your life is perhaps not going as planned. When everything around us is joyful, it’s that much more of a stark contrast when we are not.

And so I have asked Poppy Smith, author of Why Can’t He Be More Like Me?, to guest post about a difficult time in her marriage today.

The advertisement for a marriage seminar caught my eye. It asked the question, “What do you and your husband have in common?” An anonymous woman had scrawled across it in red ink, “We were married on the same day!”

I burst out laughing. But early on in my marriage, I probably would have burst into tears.

My American husband, Jim, and I met in Nairobi, Kenya. I was twenty, lonely, on the rebound from a broken relationship, and had no family in the country. My parents had returned to England because my father’s tour of duty with the Royal Air Force had ended. Instead of going back to England with them, I decided to stay.

Shortly after that I met Jim. He strode into the small, English church I had attended since becoming a believer three years earlier, and all my female senses went crazy: Who is this man? Is he single? Is he passing through town or is he going to be here for a while? How do I get to meet him? Well over six feet, dressed in a tan, tropical suit, Jim’s physical appeal oozed out of him. The fact that he pulled out a small Bible and joined in the singing only heightened my determination to find out who he was.

Two years later we married in the same church. Arriving in America six weeks after the wedding, Jim began a rigorous five year surgical training program. When I did see him, he was exhausted. Sleeping and studying filled what little time he spent at home. When we talked, we clashed. Issues we’d never seen as potential problems tore at our relationship: different backgrounds, opposite perspectives, and incompatible personalities. Neither of us knew how to respond to the pain we both felt.

In my early twenties, unhappily married and with no family or friends to turn to, I wanted out. My dream of living an exciting adventure as a newlywed in my adopted country had become a nightmare. I was more lonely and miserable than ever.

After several years of constant blaming and fault-finding, ping-ponging between frustration, rage, and depression, I came to the end of myself. I was emotionally exhausted. Instead of my incessant pleading with God to change Jim, the Holy Spirit impressed on me “Poppy, look at yourself.”

What I saw wasn’t pretty. But it was the best thing I could have done. My attitudes were not loving or kind. I was not patient. And I allowed my negative thoughts to influence my mood which produced my less than godly reactions and words.

Moved by the Holy Spirit, I sobbed “Lord, please change me. I have become someone I never wanted to be—bitter, angry, sarcastic, and hurtful. I need You to touch my mind, my moods, and my mouth if I am to ever become the woman You want me to be”.

Did this miraculous transformation happen overnight? Did God wave a magic wand, suddenly turning me into a sweet, submissive wife who never disagreed with her husband ever again? Nope. In fact, the inner transformation I needed is still going on decades after that crisis point. But change has happened.

How about you? What does God want to change in you and your marriage? He will go to work when you invite Him to keep working in your heart, attitudes, and actions (Phil. 1:6).

For practical helps to understanding yourself and your husband, check out my newest book, Why Can’t HE Be More Like ME?

Poppy Smith inspires women to grow spiritually, emotionally, and personally through her inspirational Bible teaching and books. To know more or invite Poppy to speak, visit her at: www.poppysmith.com