A Little Fun for Fall

It wasn’t fun. But I’m filling in on our local Christian radio station’s morning show, so I’m co-hosting from 6-9. And I am not a morning person!

Nevertheless, I trudged off to UCB Canada this morning (and yesterday morning) and Timmy Boyle and I had a great time. I felt a little bit like Les Nessman trying to figure out the weather, though. All we did was go on various news sites to see the current temperature. But if the temperature was 3 degrees Celsius at 6, and it’s now 6:50, you kinda figure that it had warmed up a bit. So we fudged the numbers. Shhhhh. Don’t tell anyone. Industry secrets and all.

Funniest thing that happened to us yesterday–Tim was asking me on air about a bunch of their discussion topics from the week before. And one of them was canning. Do I can fruits and vegetables? No. But I used to! But I threw in, “hey, if any listeners have any homemade salsa they want to throw my way, I’m open.”

Half an hour later the studio’s doorbell rang. A listener brought salsa.

So Tim decided to go for gold. He announced on air that we had salsa, but we needed chips. And sure enough, right before 9 we received chips as well. Listeners are awesome! 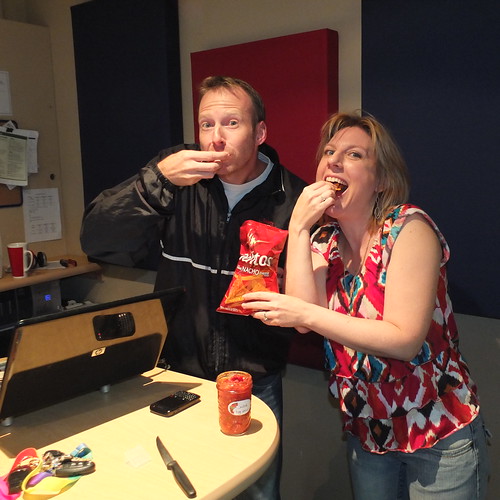 I’ve just finished writing a group Bible study for The Good Girl’s Guide to Great Sex. Didn’t think it could work as a study? Well, it can! I’ve included lots of passages to look up and discuss how they relate, and lots of discussion points (where you can talk WITHOUT having to reveal too much about your hubby or bad mouth him in any way). I hope to have it available for you soon!

Also, when I announced this on my Facebook Page (have you joined us over there yet? If not, head on over!), a number of commenters said they’d like an online study. Would you like one? If so, leave a comment and tell me what time works best: weekday afternoons? Evenings? Weekends?

I’m also getting an ebook version of my 29 Days to Great Sex Challenge ready–but it’s going to be 31 Days! It will also have about 5 extra challenges, because I’m taking out the “pep talks” I had to do throughout the 29 days and just turning them into “time outs” rather than specific days. And I’ll have challenges for the guys, too, so it’s not only directed at you! I’m going to have that ready soon, and you’ll be able to use it as a stocking stuffer for Christmas for your husband as well. If you want to be notified when it’s ready, you can sign up here, or just look for announcements on the blog.

One more thing about the blog: some of you who also blog may know that Feedburner, which delivers all the blog posts by email for those who subscribe, has gone really wonky this week. It’s dropped all subscriber stats to 0 (even though I know I have 5000+). So can you all do me a favour? If you read me in an RSS reader, or by email, can you just leave me a comment and let me know if you’re still getting updates? I hate worrying about it. And if GOOGLE DOESN’T FIX THIS FAST (do you hear this, Google?), I’ll probably migrate over to another service. But you all won’t have to change anything. Your subscriptions will still be fine.

Okay, another snippet about life. I had a horrible cold last week. I only get horribly sick about once or twice a year, and this was the worst I’ve been in a few years I’m sure. I couldn’t even use the computer for a few days. And you know that horrible moment when all the Kleenex is gone and you realize that all you have is cheap toilet paper and paper towels? Yeah, so do I. 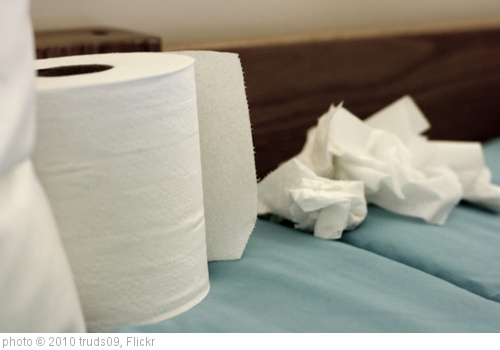 But what do you do when you’re sick? Do you go sleep in a different room? My hubby and I were both sick and I just bailed for four days. I find when I’m sick I’m so restless, and when I’m worried about bugging him then I can’t sleep. Thankfully I felt much better yesterday morning before I had to go in and fill in at the radio station. But I hate being sick!

Okay, last thing: yesterday my daughter worked nine hours at the YMCA, where she lifeguards, teaches swimming, and teaches aquafit. She spends part of her day talking with seniors and teaching them in the pool, and then the other part teaching kids. She just loves her job. Can I take a moment and say how proud I am of her? I think it’s awesome that she’s serving such a wide variety of ages, and enjoying every minute of it. Lifeguarding pays quite well as far as teenage jobs go. It may take a lot of training, but I think it’s worth it. And jobs when you’re a teen can teach you so many life skills!

Where did you work as a teen? Let me know!