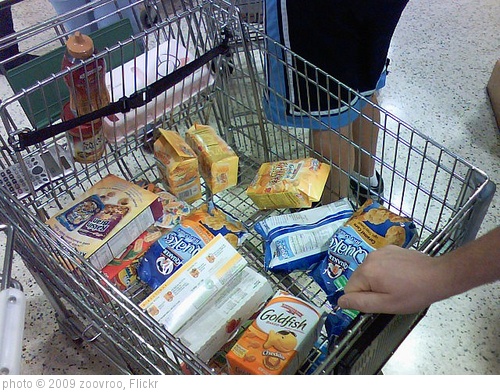 Every Friday my syndicated column appears in a bunch of newspapers in southeastern Ontario and Saskatchewan. This week’s was more political in nature about the Olympics, so I thought I’d reprint one from 2004 about grocery shopping that I kind of like. Here you go!

I hate grocery shopping in the summer. The shopping itself is not the problem. It’s the possibility of meeting somebody I know in the checkout line. You know that little routine; you probably do it yourself. There you stand, with your cart filled with chips, hot dogs, ice cream, popsicles, and pop galore, and you try to arrange the one bag of romaine lettuce so it hides the Twinkies. “It’s for the kids, you know,” you say, knowing full well you’ll consume more than half of the stuff yourself.

I eat horribly in the summer. So does my family. It’s not intentional, exactly, it’s just that when you’re at the beach, or out camping, or going on a picnic, it’s so much easier to grab a bag of chips than it is to make a fruit salad.

My kids absolutely adore summer, and it’s not just because of the swimming. For once they don’t have to beg for the Fruit Roll Ups or the ice cream sandwiches to no avail, because I actually say yes. I know you can pack healthy foods for a picnic, and two or three times in the summer I actually try. When we go camping, we do start out with a lot of fruit and vegetables, but by about the third or fourth day these are all gone and the chips are popping out again.

During the school year I am preoccupied with those 5-10 servings of vegetables and fruits a day we all are supposed to eat. I count fibre grams on the cereal boxes. But I love summer and cracking open bags of granola bars with marshmallows and chocolate chips in them that the kids usually only get from their grandma.

Naturally, I feel a tad guilty about this, but I figure the kids are running around so much they’re at least burning off a lot of calories. What really amazes me, however, is how expensive my summer grocery bill is. It’s not just the chips and pretzels, either; cooking with Hamburger Helper or store bought marinade packets, our camping staples which I never buy normally, sure make that bill add up.

I simply do not know how people afford groceries if you buy prepared foods all the time. I once heard that for a healthy diet, you should spend 90% of your money on the outer aisles of the grocery store: the bread, the dairy, the fruits and vegetables, and the meats. Normally I never venture into those inner aisles, except for flour or to feed my Diet Pepsi craving. And that’s probably why we usually only spend about $90 a week on groceries for the four of us. It’s not expensive if you’re making food from scratch.

Increasingly, though, people don’t do this. First, many of us were never taught how to cook from scratch. We simply don’t know how. Yet even if we do know, it can be hard to find the time or the energy. The other seems so much easier. And it is. But it’s not healthy, and it’s sure hard on your wallet.

This year I’m starting to teach my 9-year-old how to make some simple suppers, including spaghetti and chicken pie. Neither is difficult, and she’s feeling very grown up knowing that she can actually cook. The next step is to make twice as much and freeze half, so that when we are pressed for time, we’re not tempted towards those other aisles.

My husband, when he had his pediatric office practice, often had parents complain that a healthy diet was just too expensive. That, however, is a common misperception. Certainly fruits and vegetables can seem expensive (although they’re never cheaper than they will be right now during the summer), but think how much more two apples will fill you up than a whole bag of chips. You don’t need to buy as much food if you’re eating healthily as you do if you’re depending on starches to fill your diet.

I’ll try to remember this when I’m stocking up for my next camping trip. But I probably won’t completely return to my winter ways just yet. So if you happen to see me in the grocery store, and I pretend not to notice you, just don’t look in my shopping cart.

Don’t miss a Reality Check! Sign up to receive it FREE in your inbox every week! Subscribers, sign up HERE.