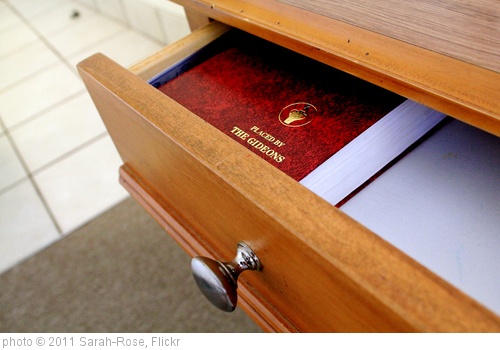 I thought this was a joke when I first heard about it, but no. A hotel in England has actually removed the Bible from its drawers and replaced it with 50 Shades of Grey:

The owner of the Damson Dene Hotel in Windermere has taken the unusual step of swapping all the Bibles in his guest rooms for the steamy novel Fifty Shades of Grey by EL James.

“I thought it would be a special treat for our guests to find it in their bedside cabinet and that includes the men too,” Wayne Bartholomew told The Telegraph.

I’ve received so many emails about this from incensed readers, and my Facebook Page messages have been burning up with it, too.

But in the meantime, a few thoughts.

A vicar was quoted as saying this in response to the hotel’s actions:

“Fifty Shades of Grey is all the rage but is likely to be a passing fad. The Bible is a classic, shaped and reshaped by Jewish and Christian communities over many centuries,” Rev. Michael Woodcock told the newspaper.

Second, would you REALLY want to sleep in this hotel now? I mean, ugh, think about what’s on those hotel comforters. I’d get out the Lysol. (I know that’s true in every hotel, but this is just advertising it. Gross).

But now I’d like to invite you all to have your say. So many people have written to me all fired up, with things to say but you don’t know where to say them. So, please, if you’re mad about this, or sad about this, or even if you think it’s great, leave a comment. Feel free to leave a long one if you like. And then next week I’ll publish another post highlighting some of the best ones. Let’s get the message out: Sex is beautiful between two married people. You don’t have to explore erotica and bondage to get great sex!