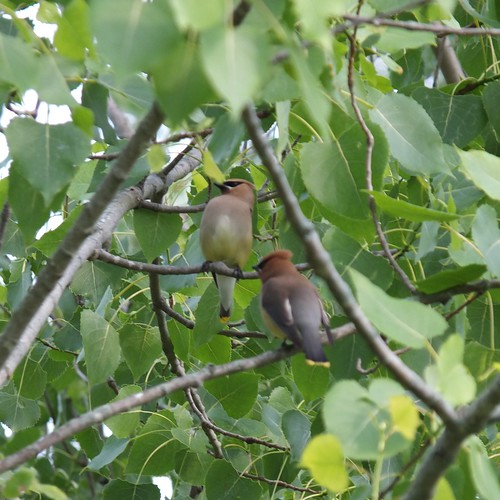 On Sunday, Father’s Day, Keith decided that what he really wanted to do was go bird watching. He and I have recently taken up the hobby, and it is fun! We’re learning to take better pictures, and we’re learning to identify birds, but best of all we get out in nature and just get to go for walks and hikes together.

So it was that we headed to Presqu’ile Provincial Park, one of the best birding areas on the continent if you want to see water fowl. And we did! We saw our first Egret, and our first Tern, and some other birds. 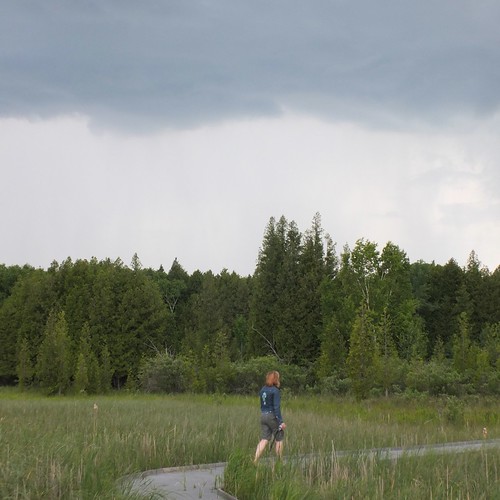 On one particular hour long trail, though, birds were not the only wildlife present. In fact, they weren’t even the most common. That honour belongs to the mosquito. I had to keep my hands in my pockets because every time I tried to lift the binoculars to my eyes mosquitoes would swarm my thumbs, the one place I forgot to put bug spray. There were so many it was like walking through a haze.

And about halfway through this trail I felt nature calling.

There I was, a female, on a public trail, desperately having to go to the bathroom, with visions of a million mosquitoes reacting gleefully to my exposed bug-spray-free nether regions.

We eventually found a lookout near the water which had far fewer mosquitoes, and which was off the beaten path. So as Keith stood guard, I peed the fastest I have ever peed in my life, crouched over several weeds, begging God that they not be poison ivy.

Then Keith had to go to the bathroom. He wandered into a bush, did his business, and he was done.

There are certain times when being a man is of great advantage.

Monday morning I turned on my computer and was greeted to this story:

Men who work for the county council in the Swedish province of Sormland could be required to sit down while urinating, if a motion put forward by the Left Party passes.

The party is taking a stand against men standing up to urinate for two reasons: the first is hygiene, the second is medical research they say shows men empty their bladders more efficiently when seated, The Local newspaper reports.

The seated-urination motion applies to toilets in the office bathrooms at the Sormland County Council and the Left Party proposed that, as a first step, dedicated standing toilets be labelled as such for men who refuse to sit while they pee, The Local reported.

One of the blessed things about being a man is that you can pee standing up. I am insanely jealous of this. And yet even this is now being taken away from men. Peeing while standing is apparently unhygienic (the splashing and all that) and unhealthy, since men supposedly empty their bladders better while sitting. So acting like a man in one of the most fundamental and basic ways is now being labelled inferior.

If I were a guy, I’d be a little ticked. Everywhere you go you’re told that being a man is substandard. Women are the good ones, because we understand relationships. Men, on the other hand, are base, because they don’t understand feelings. Men like dumb things, like competition, too much, and so we have to take it out of the schools to make everything fairer. Schools outlaw playing tag or British bulldog because it makes some kids uncomfortable. Instead, you’re supposed to play cooperative games.

Men are not allowed to be men.

And then we wonder why there’s a crisis in passivity for men. A while back a woman sent in a Reader Question of the Week: what do I do when my husband refuses to work, and wants to just do nothing? The passive male is becoming far more common, and is one of the reasons that male sex drives are plummeting.

And many men just tune out.

How about we just let men be men? Women are not superior; we’re just different.

Often we marry a man because he’s different from us, and it’s that difference that attracts us. But as soon as we marry him we try to turn him into a woman. We start trying to domesticate him, and reward him when he does female type things and ignore him or ostracize him when he acts like a guy. And then we’re surprised 15 years later when he’s become a shadow of his former self, and we find him boring.

Let’s let men be men. As for me, I’m glad my husband pees standing up. What about you?