Not Your Grandmother's Math 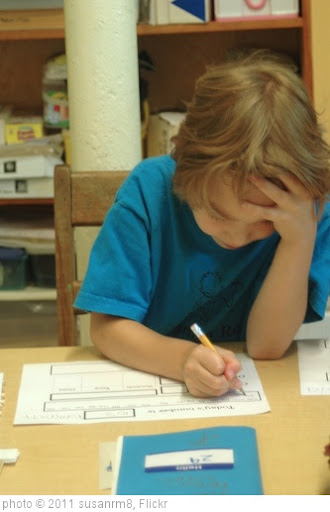 Every Friday my syndicated column appears in a bunch of newspapers in southeastern Ontario and Saskatchewan. And–gasp!–sometimes I actually write about stuff other than sex. Lately I’ve been preoccupied with The Good Girl’s Guide to Great Sex, but here’s this week’s column for something different. If you have children in elementary school, and you’ve tried to help them with math lately, you may be able to relate:

When I was in grade two, I distinctly remember breaking out in a cold sweat when my teacher divided us into pairs to drill our subtraction facts. I could not for the life of me remember what 13-7 was. Nevertheless, I ended that year being able to recite all my math facts backwards and forwards, because that’s how we were taught.

Maclean’s magazine ran an interesting article recently detailing how math drills are passé. Not just that, but public schools often don’t teach long division anymore, or reinforce the other algorithms we grew up with (like add up the column and carry the 1). Today they do something more visual and more complicated.

A few years ago, our family went on a trip to a Kenyan orphanage, and our local Board of education graciously donated a complete set of grade 3 textbooks to ship over. When we showed the principal of the school those textbooks, he smiled sheepishly and said, “no, thanks.” I asked him to elaborate. Uncomfortably, he finally admitted, “They don’t teach things systematically. They spend too much time teaching about calculators. And they don’t teach the proper addition and subtraction techniques.”

As I flipped through the book to see what he was talking about, I recalled a story my nephew had told me about scoring 0 on a question on a math test. The question asked, “what is 6 times 6? Explain your answer three ways.” All he wrote was 36. That wasn’t good enough, apparently.

According to our education superiors in the government ministries, we face a math crisis because children were taught the “facts” but not the reason behind them. So today they use math manipulatives, like base 10 blocks. They use different algorithms to add things up, instead of memorizing and perfecting just one. They have lattices and grids and paper strips instead of just columns of numbers.

Through these methods, we’re supposed to produce children who can think creatively, rather than children who can just recite their times tables. And the benefit of North American education over Kenyan education, supposedly, is that our children will excel in this kind of creative thinking.

I understand. But the vast majority of our students will not be software developers or engineers. They will be interior designers, who have to calculate the surface area of a room to know how much paint to order. They will be cashiers who have to make change. Or they will install flooring, and need to know how many boards to order. That’s why I would prefer we educate people to actually know what 6 x 7 is.

In Kenya, kids who had missed out on years of formal education, and who were using scratch pads with broken pencils, sitting two to a desk, could do math in grade 5 that we in Canada don’t do until grade 8. And they don’t use calculators, either.

Look, I can drive a car. I can sit in the driver’s seat, turn the key, and steer the wheel. I don’t understand why a car works, but I can get from point A to point B.

Similarly, by teaching and reinforcing the basics, at least kids could use math, and with that practice often came understanding. Now we’re trying to teach them to understand it first, but they’re not able to use it. We’re attempting to teach kids how to build an engine, but they still don’t know how to steer a car. And how well, ultimately, will someone do if they haven’t mastered the fundamentals? Perhaps it’s time to get back to basics. That’s what our grandparents did, and they knew how to make change.