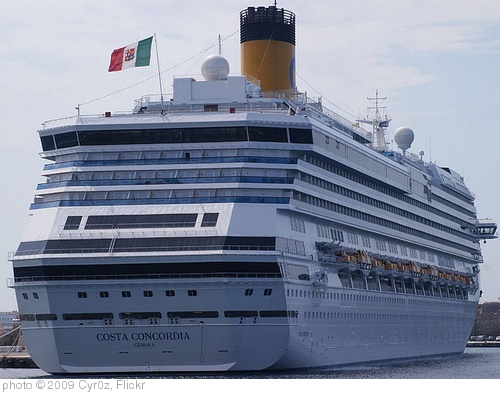 Every Friday my syndicated column appears in a bunch of newspapers in southeastern Ontario. Here’s this week’s.

The Costa Concordia, which ran aground last week off the coast of Tuscany, was, in part, a feminist tragedy. At the time of this writing, twenty-nine people are still missing and eleven are dead.

Why do I think feminism is implicated in it? Because, according to some passengers, when it became clear that lifeboats were necessary, some crew pushed past women and children to get to the lifeboats first, while many burly male passengers did the same thing. By some passenger accounts, it came down to the waiters and servers, who were not trained in operating the lifeboats, to help people off the ship. Even the captain abandoned his passengers, leaving pregnant women behind him.

When the Titanic sank, the men followed the “women and children” first rule. In fact, you were more likely to survive as a third class female passenger than a richer male one. But that was a century ago. We have progressed since then. Now it’s every man—and woman—for themselves.

In the comments I’ve been reading on the news reports, people seem to agree that children should be given priority, but there’s a heated debate about the women. We’re equal, so why should a man lose a place to a woman? Why should a man have to help a woman when he’s in danger, too?

And, as disgusting as I find that question, it makes sense. In 1912 it was a different world. Personal responsibility was still the main ethos of the day. People took care of their neighbours; they did not wait for government to do it for them. And people had a code of honour that included helping others when you could.

Somehow we have lost that. It is no longer about honour and what we should do for others; it has become what others should do for us. We’re supposed to snatch from life everything we can get, not give up things to help others. Perhaps it’s part of the demise of religion. In 1912, most believed in God and an afterlife. They knew this was not all there is. Today many believe our lives are comprised of just these few short years we get on earth. So we had better to take what we can.

This seemed to have been the philosophy of the European staff on the ship. By passenger reports, it was the “Third World” waiters and housekeeping staff that helped in the tragedy, while many from Europe, including the captain, fled. Obviously there are exceptions, such as the British dancers who formed human chains to get passengers on board the lifeboats, but those who were supposed to help largely did not. The wait staff tend to be the cream of the crop from their countries, and they still have honour. And so they stayed.

Honour and integrity are integral to a healthy society, but they will not coexist in large measure with constant demands for rights, and privileges, and special status. That’s why feminism largely destroyed chivalry. If women are as good as men, then why should men be honourable to help us? In fact, by helping men can too easily be criticized, because they are implying women are weak.

Here’s a news flash: we are. On the whole, women are weaker than men. That’s why women and children were supposed to go first. It was a recognition of reality. The stream of feminism that says the genders are the same—and granted, not all feminists believe this—is an attempt to distort reality to achieve a political aim. Many female passengers this week are disgusted with the males on board, as well they should be. But we should not be surprised, because it is the society that we created that shoved aside honour in the first place.

UPDATE 1: Thanks for all the links, people! I know some of you think I’m way too easy on women, but perhaps you should read this (about why husbands don’t always meet their wives needs) and this (Just say Yes!) about my philosophy about marriage.

UPDATE 2: I wrote the column before the recording was made public of the Coast Guard captain yelling at the Concordia captain. I thought it was really interesting, because the Coast Guard guy was actually concerned about women and children, and trying to do things right. Plus, the whole thing is just mesmerizing in how awful Captain Schettino’s cowardice was. If you haven’t seen it yet, just listen: