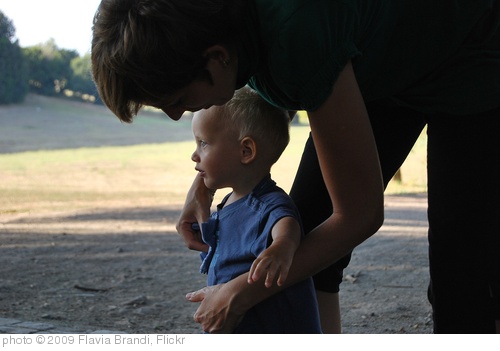 Parents, your kid’s success or failure, to a large degree, depends on you.

I met Kate on Facebook (or rather she found me there), and we’ve been corresponding for about a year now. She’s a very dynamic woman, full of energy and wisdom, and she is definitely not afraid to pull any punches. I like that about a person, and especially about a writer. Often in Christian circles we’re so scared of offending people or judging people that we don’t always tell it like it is. Kate, in this book, tells it like it is and challenges us to be the best parents we can be.

When I was endorsing the book for her before it was released, I started reading it like I would any other book. But then I realized there were so many great lines in it that I had to read it while sitting next to my computer, so I could type out the great quotes, like this one:

Successful adults don’t happen by accident. It takes years to raise a child into an adult with a strong sense of their destiny in God, a passion to serve Him and a deep knowledge of his gifts and callings.

That’s really the central thrust of her book. You can’t parent by default and expect your kid to be great. But even more than that, if God has gifted your children–and He has–then part of your job as a parent is to uncover those gifts and steer your child in the way that you can see God is leading them. And I think she’s right.

Now some people aren’t going to like what Kate has to say. Isn’t she minimizing God’s role if she says it’s up to us? Isn’t she saying that if you have a prodigal it’s your fault?

No, she’s not. What she’s saying is that God made you a parent—so act like it. Embrace it. Do it excellently. That is why God put you in your child’s life. Ultimately children can still go astray, but if we partner with God, it’s less likely.

So often we’re quick to excuse parents, saying that they shouldn’t be blamed for anything. Kate isn’t in the blame game; she’s in the inspiration game. She’s trying to inspire us to reach for the moon when it comes to parenting our kids, because our culture desperately needs godly, successful kids. And so maybe she comes across harder than some would like, but I think it’s refreshing. She’s actually telling it like it is. She’s not sugar coating it. And we need that, because too many of us are parenting wimps. So let’s break this parenting process down and see what Kate has to say:

She and her husband were both musical (she starred opposite Yul Brenner in The King and I), and so it was natural that Francesca would be, too. So they encouraged her. They told her she could go all the way.

Kate contrasts her own childhood with Franny’s. When Kate came home from school as a little girl she loved to sing. But she was always told to “stop that racket!” If she had been encouraged, how far would she have gone? Maybe she would have gotten that music degree.

And so it was that they tried to “call” things out of Franny. I loved this anecdote that Kate shares:

When she was small, we tried a little experiment with her. We’d lost a key in the front yard and we honestly couldn’t find it. We searched everywhere to no avail. Franny really wanted to help us so we told her, “Go ahead and look. You are a really good finder.” Well, she helped us look for awhile and wouldn’t you know it, she found the key! She was so excited and we were thrilled! Anytime anything got lost we reinforced what a good finder she was and more often than not, she would find the lost item. In this small way, we set her up in a pattern of belief about herself and it became a self-fulfilling prophecy.

Words are Free: So say what you see.

Kate says that she always believed it was essential to say to Franny what she saw. As God showed her things and gave her a sense of Franny’s calling, she began to speak it out over her.

Kate says: We hear it preached all the time we’re capable of greatness and have a big destiny in God, yet how many of us really believe it?

Yet it’s not only about speaking words over our kids. To be truly excellent at anything, Kate says, it takes ten thousand hours of hard work. That’s about ten years. They have to work for ten years in their field–whether it’s writing, or building a business, or learning piano, or anything–to be truly excellent. So while we need to identify the seeds of gifts in our kids, we also need to encourage them to actually work at something. It’s not about standing back and expecting things to magically happen.

Sometimes, of course, what you think is your child’s destiny is wrong. She thought Francesca would be a ballerina. That didn’t happen. But music did, and all that training helped her poise, and on stage. Oswald Chambers thought he would be an artist, but he became a preacher, but his creativity helped him.

It is not just natural ability. It is diligence to learn mastery of something. Take kids with the same natural ability, and what distinguishes them at age 20 is how much they practiced.

Kate says: What we are content to settle for is exactly what we’ll get.

And then she adds something that really made me stop and think:

And yet why are we trying to raise kids who are exceptional, who are world changers, who are “great”? It’s not so that our kids get glory, or that we bask in the glory beside them. It’s something far more fundamental, and she repeats a saying that I’ve been telling my children since they were toddlers: “to whom much is given, much is required.”

I love that Kate focused on that, because in my opinion, we have so much in North America. ALL of us have been given a lot, even if it doesn’t seem like it. God has made us in North America responsible for giving and for leading, because we have the resources. We need to step up to the plate. To continually compare ourselves to our neighbours is a recipe for being weak for God. We have so much; how are we going to use it? We have opportunities most kids in other parts of the world can’t even dream about. We have money. We have homes. We need to raise kids to think of themselves as those who have been blessed by God, and those whom God wants to use because of that to change the world.

That’s how Kate sees it. She says:

Consider why God gave your child their gifts and talents in the first place. I believe there is one reason and one reason only and it’s to bring Glory and fame to His name — not ours.

So she wanted Franny to succeed so she could make an impact in the kingdom of darkness.

And yet let me sum up her philosophy with this last bit:

We are to pursue excellence but not perfection. As Franny wrote in her song “Free To Be Me”, “…perfection is my enemy.” We can drive our kids crazy and do real harm by demanding perfection from them, but we hold them back if we don’t require excellence in all they do. Excellence is simply going beyond what’s expected; rising above the standard; leaving things better than we found them. To pursue excellence is to pursue being the best we can possibly be with the gifts and talents God has given us, with humility and the understanding we aren’t in competition with others, and the blessing of doing it for God’s glory.

To excel is to simply do the best we can do to honor God with our lives. Growing Great Kids really challenges us to do that. You’ll find yourself very uncomfortable reading it, because she calls parents to task for what we AREN’T doing in our culture to raise great kids. But I’ve shared with you her philosophy; in the book Kate also shares tools and practical tips on how she and her husband actually accomplished this with Francesca.

This isn’t your typical parenting book. It’s not sugar and spice and everything nice. But it’s exactly what this generation of parents needs, because too many of us are parenting while asleep. So if you want a challenge, and you want to grow great kids, read what Kate has to say. I’m glad I did.

Find Growing Great Kids on Amazon. And you can find Kate Battistelli on Twitter or on Facebook!

Now it’s your turn: What do you think is the essential ingredient in Raising Great Kids? What part do we play, and what does God play? Let me know in the comments!