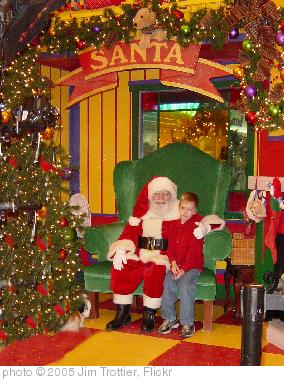 I have a confession to make. My daughters and I have a rather guilty pleasure around Christmas time. When we’re at the mall in December, we often grab a bite to eat and then sit at the table that’s right in front of the Santa Village. We love watching the kids get their pictures taken with Santa–largely because we find it kind of funny that parents would force crying toddlers to sit on Santa’s lap. By our count, about 50% of the kids who get their pictures taken on Santa’s knee do not want to be there. And so I can never quite figure out why parents do it.

That probably makes me quite warped, but our family has never really embraced Santa. It all started when I was very young and just didn’t “get” the Santa thing. Even in kindergarten, I couldn’t figure out how he could be everywhere at once, and how he could deliver presents to people who didn’t have chimneys. And most of all, I couldn’t figure out how he could be at the mall, taking pictures with kids, if he was supposed to be getting our presents ready. So I didn’t buy it.

Unfortunately, I shared my skepticism with my kindergarten classmates, and my mother was getting hate phone calls for weeks. We almost had to leave town, other parents were so mad that we had “ruined” their Christmas.

Then, when we became parents, we had to decide what to do ourselves. And I couldn’t get into the spirit of pushing a Santa I had never believed in, especially since I thought the Santa movement can obscure the real meaning of Christmas, which is Jesus. Now I know other Christian parents still do Santa, and that’s okay. But in the years when we had relatively little money, I didn’t want my kids thinking that we hadn’t gotten them a gift, and that only Santa had bought for them! So I wanted to put our names proudly on the presents.

Our kids never minded, and always thought it strange that their friends still believed in Santa, when they could see how silly it was. Perhaps kids have better Christmases with Santa, but my kids certainly enjoyed Christmas without him.

Of course, sometimes people are pressured into doing Santa from grandparents or other well-meaning relatives, but I really think it should be up to the family.

So we have never done Santa, and my girls have grown up thinking the whole thing is rather silly. What about you? What’s your Santa story? Let me know in the comments!