Am I Too Hard on Women? 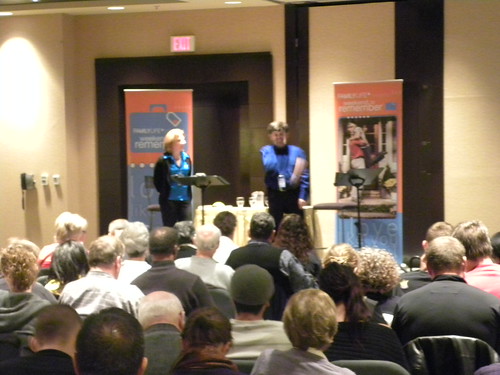 My husband and I speak at FamilyLife marriage conferences around the country, and most of the time we do the talks together. We talk about communication, and sex, and accepting each other, and resolving conflict. But on Sunday mornings we split up, and Keith and the other speaker guy take the husbands, and the other speaker woman and I take the wives.

One of the interesting things about giving the wife talk is that, as I start to talk about what a woman can do to make marriage great, I see many in the audience looking distinctly uncomfortable and shifting in their seats. So, just like clockwork, about seven minutes in, I stop my talk, and say:

I know you women are uncomfortable with me saying all these things that you should do. But let me reassure you that right now my husband has all of your husbands in another room, and he is blasting them and telling them what they need to do, too, in no uncertain terms. So don’t worry. Your husbands are hearing an important message. So get your minds off of them and let’s just spend this time thinking about what we as women can do to make the marriage great.

After that, the women laugh, visibly relax, and I can go on.

Sometimes, when writing this blog, I can see the same attitude in the comments, and it goes like this: I won’t listen to your advice for how women can make their marriages better unless I’m assured that someone is lecturing my husband first, because he’s the one who really needs to change. It came up last week in my post about how making love to your husband, even when you don’t feel like it, is not the same as rape. One woman made the point in the comments that too much of Christian advice and Christian counselling is talking about what the woman must do, rather than telling men to step up to the plate. Here’s what that commenter said in another comment thread:

I for one am tired of well-meaning Christians not holding men’s feet to the fire. The Bible is pretty clear that men need to love their wives as Christ loved His Bride, the Church. I don’t see Jesus standing at the foot of the cross saying to Himself: “Well, you guys are weren’t dying for today because there’s a ballgame on and you don’t look very pretty to me.”

Did Jesus and does He still ACTIVELY pursue His Bride? Should men continuously make their wives a priority and pursue them?

Another thing: I hate these lists that men are given to tell them how to show love to their wives. Buy her flowers. Write her little love notes. Do this for her. Do that for her. I think the best thing a man can do is quit relying on those generic lists, even such advice from “Christian” counselors, and start studying your wife. Make your own lists, men, that show you wanted to be sincere and genuine in your relationship with your wife. . . That you actually treasure your wife and realize she is a unique creation by God given to you to CARE FOR, PROTECT, SERVE, and HELP. You’d do this with your own children, wouldn’t you? Why not with your wife? The Bible tells me to get to know their wives. It’s easy to follow a list. It’s harder and demonstrates great care to genuinely get to know your wife.

(By the way, women should do the same for their husbands.)

Men, women have to have the babies. The least you could do is make a date once a week or two. Get off your butts. Feminism occurred because men liberated themselves from the home during the industrial revolution. . . And gradually, they turned their backs on their familial and marital duties. It particularly heightened post WWII.

Please, Christian church ladies, quit making excuses for Christian husbands. Somebody, PLEASE SOMEBODY, hold their feet to the fire. As long as you keep telling women to do what men ought to be doing, it’s not going to improve.

Now, I agree with her. Absolutely men need to step up to the plate. But here’s where these comments sometimes annoy me. Right now, take a look at the header on this blog. What colour is it? Pink, right? Now, I have a weekly meme that occurs every Wednesday called Wifey Wednesday. Who do you think that’s directed at? That’s right. Women.

I’m talking to women. So when people disagree with me because they think I should be harder on the men, I have to wonder: how do you expect me to do that? Men are not reading this blog. This blog is not for men. It is for women. And very, very few men actually read relationship blogs. If I were to write a blog for men, they wouldn’t come. When I write my column for men that appears in the Promise Keepers magazine in Canada, I tell men what they can do to make their marriages thrive. But men are not reading this blog.

And then there’s a bigger issue at work here: Yes, your husband may not be treating you very well. Yes, your husband may be selfish (we all are, after all). Yet when people say, “because he is selfish, he needs to hear from God first, and he needs to change his behaviour first”, then you start acting as badly as he is. Nowhere in the Bible does it say that we should wait for someone else to do the right thing before we do the right thing. We are supposed to love our husbands regardless.

This does not mean that we are to be doormats, and indeed, acting like a doormat and enabling him to treat you disrespectfully can make your marriage worse. I have spoken about this at length. It also does not mean that we put up with abuse. Sometimes I guess I don’t say that clearly enough in my posts, because I often have commenters saying, “my husband was abusive and you think I should just stay with him?” I assume that most readers understand where I’m coming from, but perhaps they don’t. So let me say it again: I do not think you should be a doormat, and I certainly don’t think you should put up with abuse.

However, most of the problems in marriage can’t be classified as abuse. They’re just negligence or passivity or selfishness. And none of those things gives you the “right”, for lack of a better word, to stop loving your husband. If you want to change the dynamic in your marriage, then work on changing how you react to him. Love him, find out what his love language is, work on your friendship, and make sure that you’re acting in such a way as you command respect. Do these things, and your marriage–or at least your peace of mind–will likely improve. If you decide that you’re right, and that you shouldn’t have to change because he should change, then you’re basically resigning your marriage to never improving. You can’t force him to change, so if you decide you won’t do anything, either, then your marriage is stuck. I want to give women strategies to “unstick” their marriages.

Does this mean I’m saying that all marriage problems are laid at the woman’s feet? Not at all. Sometimes you can do everything possible and the marriage will still fail. But as I said before, I am writing to women. I am not writing to men. And to say to a woman, “you’re right, your husband is a jerk, you should make him treat you better and withhold from him until he does” will not make your marriage better. It’s not biblical, and it won’t actually solve your problems.

I could say that, and get a lot of traffic, because many women just want to hear “you are totally right, he’s an idiot, and you’re justified in being angry.” That’s actually quite a popular message. Yet who cares if  you’re right? It’s one of those cases where you may win the battle but lose the war. In marriage, it’s either win-win or lose-lose. There is no win-lose. If you both don’t win, you both lose. So feeling morally superior doesn’t help a marriage, even if you are in the right. What you need to do is find a way through this impasse, focusing on the things that are actually within your sphere of influence: your own attitudes and actions.

When I give advice to women, then, it isn’t that I think women are completely to blame or that men shouldn’t improve. It’s that this blog is actually for women, and the only effective advice I can therefore give is what women can do to change the dynamic, not what men should do.

I hope that’s clear. I’ve written this post so that next time people berate me in the comments for laying the blame at women’s feet, and not telling men to shape up, I can point them back to this post!

Now it’s your turn! Let me know: do you think I’m too hard on women? And, given that many men do need to improve in marriage, too, how should they hear about that?