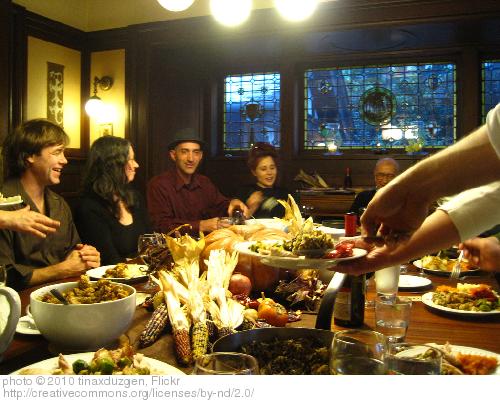 To all my American friends, Happy Thanksgiving!

I’ve been having some deep thoughts about traditions lately, and I’d like to share a picture with you.

The first Thanksgiving was truly gratitude for getting through a hard winter and gratitude for a harvest. It was looking back and seeing how God had provided. But I don’t think it was ONLY looking back. It was also looking forward. “We’ve come this far, people! God will take us further! Look what He has given us! He will continue to provide for our families.”

And that’s what it was–it was this dream that God would provide for the families that He has given us.

I think, by and large, that many of the generations have forgotten that dream.

Let me paint you a picture of the generation that came before us, and then conclude with a warning for ourselves.

Now the Baby Boomers have proven to be the most selfish generation in history. They abandoned faith and embraced humanism. “It’s all about me!”. Free love, free sex, everything is about being true to yourself. Even if that meant throwing out your marriage–or never getting married at all. You shouldn’t stay with your spouse or kids if it doesn’t feel right to you. The worst thing you can do is to not honour yourself.

And so they threw off the trappings of family, and the divorce rate skyrocketed (I know; I was one of the early victims). But being out for yourself didn’t just impact what they did in their families; it also impacted how they voted. And how did they vote? They voted for tons of money for seniors. They voted for tons of social programs. They voted for high public pensions. They insisted on unsustainable pensions in their own industries. They tapped into unions, which fought based on seniority, not merit, making sure that future generations wouldn’t enjoy the same benefits they did.

And now, when governments are completely cash strapped becuase of all of these things Boomers voted in for their own benefit, Boomers are continuing to vote for those programs, so that the country (and my own country of Canada) can’t have a reasonable conversation of how we will cut spending. In the United States, the debt per every man, woman and child is now at almost $50,000. And Baby Boomers will largely receive the benefits of that money; the rest of the generations will pay it.

Because they vote in such large numbers, there is really very little that we can do to reverse this. Their generation was spoiled by their parents, raised to throw off their faith and look out only for themselves, and they did a very good job doing it. They eradicated morality. They rejected marriage. And they tried to get all the money they could, even if it hurt their kids.

We are their kids (at least I’m assuming most of my readers are). Now, I know that not all Baby Boomers were awful. Of course not. Many of us have wonderful parents. But as a generation, this is what happened. And so we are the next generation. We are the ones who will have to pay for the Baby Boomers, while still trying to maintain a life for ourselves and our children. What lessons should we learn?

First, trying to benefit yourself, at the expense of others, ruins society. It ruins families. And it ruins your own soul. The quintessential movies of the Boomer generation, like Wall Street, or Pretty Woman, are very empty ones.

We should not try to gather everything for ourselves. We should share it. Isn’t that what the natives did on the first Thanksgiving? We should look not to how much we can get, but to how we can be responsible and generous.

Second, we need to see that it is family and faith that holds the country together, not money. We’ve been trying to hold it together with social programs, and government intervention, and it doesn’t work. We need to return to family and faith. When you believe in family, when you are tied to your children, when you believe there is a God, then you will look to the future. You will care about what happens after you. When it’s all about you, then you don’t. And you wreck society.

Our generation should not turn around and try to exercise payback on our parents, or try to get everything we can for ourselves, either. We shouldn’t respond by being greedy. We should respond by being responsible. What have the Baby Boomers wrought? So, so many will live lonely lives in retirement, separated from children, on second or third marriages, with little but their pensions.

I would rather sit around a big table and thank God for His provision, even if it wasn’t as huge as we had wanted it to be. Because when we are with family, that provision is always enough.

Thanksgiving doesn’t just point us back. With its emphasis on faith and family, it points us forward. Our generation must pick up the mantle and remember that, because our parents’ generation has forgotten it. Let’s not copy them. Let’s forge a new path, and reclaim what was good–and what still is good–about the life God has given us.

I would like to end with a very short video made from someone in my children’s generation. It sums up this whole dilemma beautifully. PLEASE watch to the end.