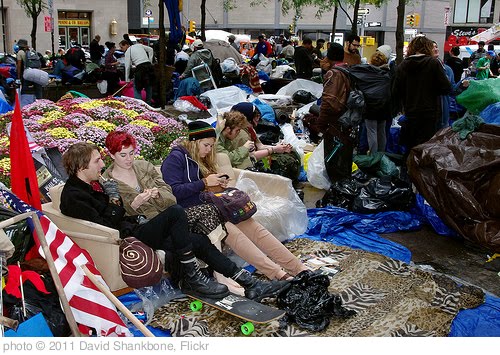 Every Thursday and Friday my syndicated column appears in a bunch of newspapers in southeastern Ontario. Here’s this week’s!

The Occupy Wall Street protesters are starting to really get to me. There they are, protesting corporations, while they film the protests on their iPhones, drink Starbucks coffee, and wear Nike clothes. Those companies did not start because the government handed people money. They became successful because someone worked really hard and took huge risks. That’s what life is about.

Nevertheless, I do have some sympathy for the protesters, because I think they have legitimate grievances. We do live in an era of crony capitalism where some companies get too much government money. Corruption is becoming far more common. And it isn’t fair.

But so what? Since when has life been fair? For the vast majority of human history, life was supremely unfair. It is just that we have recently lived through the weirdest fifty years on our planet, when the Baby Boomers enjoyed job security, company pensions, free health care, and the CPP. So we think that’s what life should be, instead of seeing it for the freakish outlier that it was. My generation isn’t going to know that kind of job security or cushy retirement, and my own kids are likely going to be worse off.

If I could say something to the protesters, I would say this: If life is going to be tougher, then you’ve got to get tougher with it. And that means not whining because you went through school and now no one will hire you. A company will not hire you because you have a degree. They hire you because you bring extra profit to their company. If you don’t bring in more money than you cost the company, why should they keep you on? They’re not a charity; they’re a business.

So you have to earn your keep. That means that your work ethic, motivation, problem solving skills, and initiative are going to be far more important than whether you excelled in your essays in Transgendered Studies, or in Art History, or in Shakespeare. It’s not that university degrees are bad, by the way; most people emerge knowing more about time management and written communication skills than they did beforehand. But it’s not the degree that’s important; it’s whether or not you’re flexible enough and adaptable enough to keep learning new skills so that you can contribute to the company.

And that’s the key: contributing. Tomorrow we’re going to remember the generation of young men and women who gave everything so we could have freedom. They gave everything, while you all seem to want everything. The contrast couldn’t be plainer. How about figuring out how you can give and add value, rather than complaining because people aren’t handing you anything.

Have you read the news lately? There’s nothing left to hand out. You can complain all you want that some people are rich, or that no one will give you a job, or that no one is spreading the wealth, but governments have no more wealth. And the more they take from others, the more the economy slows down. Look at Greece. It’s in a downward spiral, and the world’s governments can’t figure out how to contain it. It’s going to spread. And when that happens, Canada will reel, too.

We’re in trouble, folks. That doesn’t mean you won’t be able to succeed, but it does mean that you can’t depend on anyone else, let alone the government, to help you succeed. It’s up to you.

You can whine all you want, but it’s not going to get you anything. You’d do far better to start figuring out how you can forge your own path. What can you contribute? Go earn a credential, learn a skill, and start hustling. Go learn how to market yourself. You’re going to need to know. And then you’d better save for your retirement. No one else is going to do any of that for you, no matter how loudly you protest.