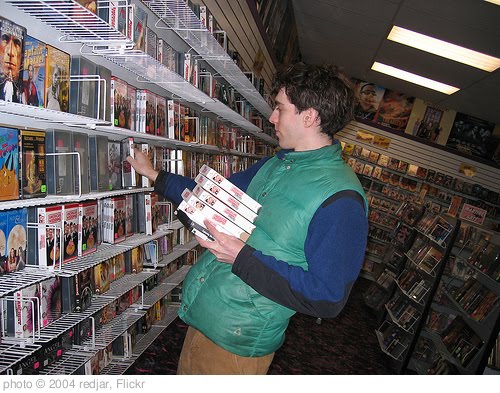 I am extremely disenchanted whenever I go to the video store. There just isn’t anything decent to see. Think about this: in the early 1960s, The Sound of Music won Picture of the Year. The vast majority of Americans had seen it. Today, fewer than 15% go to a movie theatre at all.

And it’s not just because we have DVD players. It’s because most movies are awful.

Every now and then Keith and I say, “We’re just pessimistic. We’re being silly. There has be good stuff out there!” And so we rent a movie only to turn it off halfway.

It’s not that good movies don’t make kajillions. They do. Think The Incredibles or Finding Nemo. Movies for families, or with broad moral appeal, make money. Or think The Help or The King’s Speech. My whole family, multi-generations of us, went to see both movies weeks after they came out, and the theatres were still packed. Action movies with broad appeal that don’t have a really dark hero—think Indiana Jones, or Lord of the Rings or The Bourne Identity—rake in major money, too. Movies that are degrading don’t make as much. It’s a simple fact.

And yet Hollywood streams out trash because Hollywood is trash. I know this sounds judgmental, but I truly believe that’s all most of them know. So, in order to help you when you go to rent movies, I would like to present to you my Movie Translator:

If a movie cover proclaims the movie is “edgy”, it means it was written by someone high on drugs.

If it “probes the depths of human relationships”, it means it portrays really degrading sexual fantasies, likely including some hints at incest, that will revolt you (or at least I hope it will).

If it is “illuminating”, it means it shows the perversion of the dark side of human nature. If it is “insightful”, same thing. It’s only insightful if you have a strange urge to understand your whacked out sociology professor who has experimented with most hard-core drugs, and whose children are currently incarcerated.

If it is “biting”, it bites. Leave it alone.

If it is “realistic”, it means the person writing that copy grew up in a crack house with a single mother and her fourteen lovers who were in and out of jail, and was in juvenile detention himself.

If it “exposes” something, it means the producers believe all authority is corrupt, especially all government. And you’re evil if you don’t agree! Oh, and Harry Truman was a war criminal. So was Abraham Lincoln. So are soldiers. So get with the program, people!

If it shows “a mid-life crisis”, it means some old guy is going to take advantage of some really young girl and make us think it’s okay.

So what adjectives are actually good? Well, after perusing many movies, I now only rent those which include these words in the description: Heart-warming, Endearing, Classic, Family, Touching, Funny, or, for action movies, Exciting, Heart-Stopping, or Thrilling.

That’s it. Nothing else. If it claims to be “insightful, probing, or realistic”, I run very fast out of the rental shop.

Here’s the thing: some of these movies may very well be insightful. Some of them may depict the reality of the American family. But who wants to see them? I want to be inspired and entertained, not lectured at and grossed out. So make movies to make me feel uplifted or simply entertained, not movies that make me want to take a bath afterwards. Is that so much to ask?