The "Glad You're Not Dead" Party

Today is a big day at my house. We’re throwing a “Glad You’re Not Dead” Party for my mom, who is 25 years post-breast cancer surgery this month. The whole family (granted, that’s only 11 of us) is getting together for lunch and games, and then we’re going out to a nice dinner tonight. 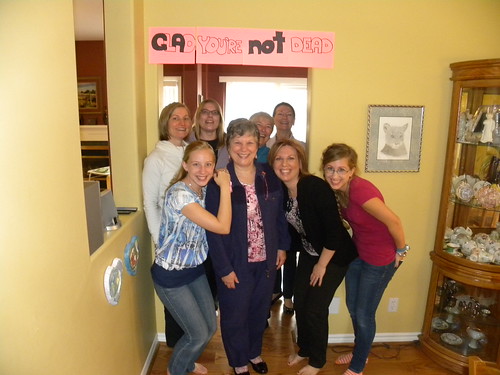 Some people have been a little offended with the name of the party, but I wonder what the alternative is. “Wish You Were Dead?” That doesn’t seem quite right. And we are very glad she is not dead.

Most people love their mothers, but not everyone likes them. Mothers can annoy you, nag you, and give you a load of guilt that no one else is quite capable of. That’s one of the reasons that I thank God everyday for my own. We’ve had our ups and downs, but I can honestly say that my mother is my best friend. And we have fun together, too. We’re both avid knitters, and now every month we get together with some other women to chat and to knit. Her mother taught her to knit, and her mother taught her, all the way back for generations. I still have some beautiful items knitted by my great-grandmother, and now we’re starting to teach my oldest daughter to knit.

Perhaps the best thing about my mother is how much she loves my daughters. She moved to Belleville, away from all her friends, just so she could be a Nana. And the girls adore her. I cannot imagine their lives, or mine, without her.

And yet, half a lifetime ago, I did just that. I arrived home from a part-time job one afternoon when I was 16 to find my mother sitting shrivelled on the couch. She was all hunched up, with a box of Kleenex by her side, and when she saw me she tried to be brave. “Sheila, come sit down. We have to talk about something.”

And then the words came tumbling out. Breast cancer. Very advanced case. Admitted tomorrow. Surgery in three days. There was a good chance this would be fatal. She was 43 years old.

I sat and struggled not to cry, knowing that my mother’s concern was far more for me than for her. She knew where she was going; she was not afraid of death. But it was just the two of us, and I was still young. She didn’t want to leave me alone. Instead of her life passing before her eyes, my life did. All the things she wanted to see: my graduation, my wedding, my children. She wanted to know who I would become.

I then acted in a very 16-year-old fashion. I left my mother, shrivelled on the couch, and took the subway to a friend’s house to talk. In retrospect, I wish I had stayed, not saying anything, and just hugged my mother.

The next few weeks were intense, as she had a very painful surgery and awaited tests. I walked down to the hospital between my high school classes to see her. Then, about a week and a half later, we had some astounding news. The cancer had not spread. The oncologist said he had never seen such an advanced case that surgery had cured. There was not even a need for follow-up treatment.

Ten years after her surgery, when Rebecca was just a toddler, we took my mother out for her first celebration party. She bounced Rebecca on her knee, looking at the card Becca had proudly coloured. Later that year we welcomed Katie into our family. And Mom has been with my daughters every step of the way–taking them on overnight visits, taking treks in the woods to watch the rabbits, even being part of our trip to Kenya. And, yes, when my Rebecca and Katie were 8, she taught both of them how to knit.

Eighty years ago another 8-year-old learned to knit. My great-grandmother taught my grandmother, who took to it immediately. My grandmother was one of two sisters, just like my own girls are. She loved Dorrie to pieces, and I’m sure they played house, and tea set, and school, and all the things my little girls did.

But Dorrie never learned to knit. During the days that my grandmother was attempting her first stitches, they were quarantined inside their house, because Dorrie had diphtheria. Unlike my mother, she didn’t make it, and my grandmother never really recovered losing her best friend.

Rebecca will never face that with Katie. Katie will not get diphtheria, or measles, or even, please God, smallpox, because over the last 80 years we have figured out ways to cure it. Perhaps in the next few decades we will cure cancer, too, so that my girls will never have to contemplate losing their mother, or dying before they can teach their own granddaughters how to knit.

Sheila blogs primarily on marriage. She is the author of The Good Girl’s Guide to Great Sex.