People Are Watching Your Marriage

Someone once told me not to say that my life was busy, but to say that it is rich and full. That’s very true, but I still feel very busy lately!

On Thursday we threw our “Glad You’re Not Dead” party for my mom, for surviving cancer twenty-five years later. The whole family was here (including some who had to fly in), and it was a great reunion.

Then on Friday my husband and I, with some other helpers, took a group of teenagers from our church to a Bible quizzing tournament in Ottawa for the weekend. It’s much less geeky than it sounds. 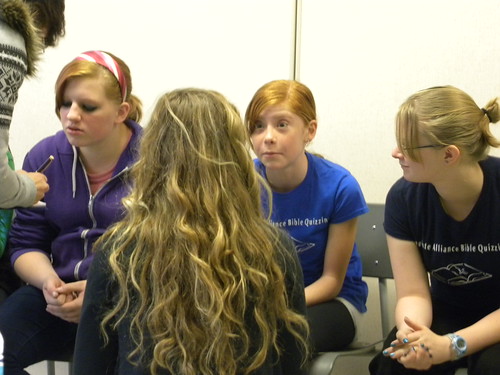 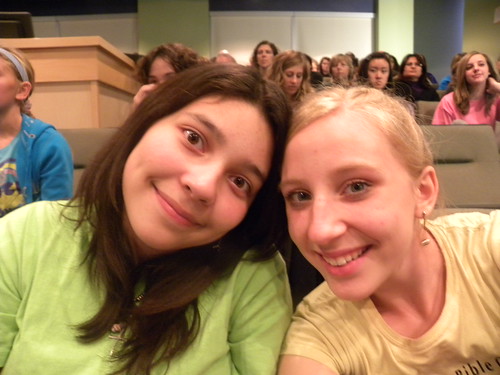 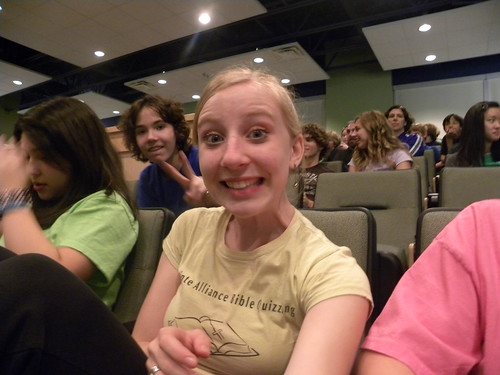 In our district of the Alliance Church, about 160 quizzers compete in four meets a year, and the top 10 go to internationals. Both my girls have made internationals the last two years, so the meets mean a lot because they have to do well (and they have friends they want to do well, too). So this weekend daughter #1 came in first and daughter #2 came in fifth, and the friends they were worried about all placed well, too, so it was a big success. Perhaps even more importantly, everybody had so much fun hanging out with each other. And the kids from our church who didn’t place as well still met their personal goals, and had a great time doing it.

Here’s daughter #1 in the quiz offs for top quizzer, beside daughter #2’s best friend (yes, he is wearing pyjama bottoms. That was his uniform. And the pink is his team’s colour). 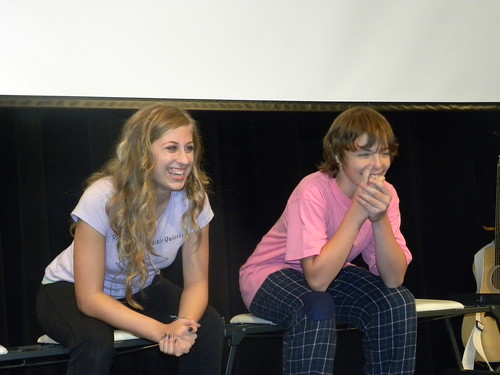 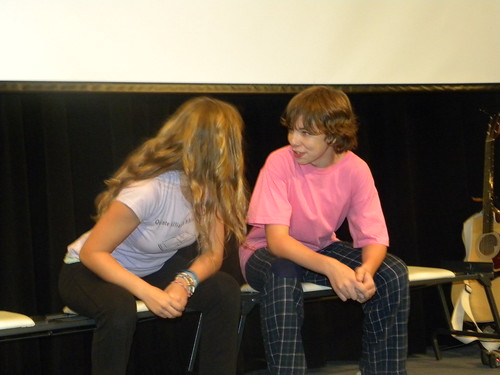 And here’s me with Becca and Nic’s dad Trevor with him, before the quiz offs: 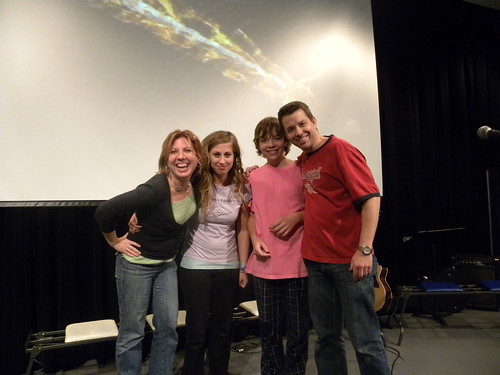 While we were in the bus ride up and back, I spent most of the time talking with two of the female coaches, both of whom are divorced (both had their husbands leave them). One is now contemplating getting back together with said ex-husband, and so we spent a lot of time talking about how to develop healthy boundaries and a healthy relationship with God before you took the plunge again with a man who has been unstable in the past. It was actually a very good conversation (at least I thought so).

And during that conversation, both women told me how cute they thought my husband and I are. My husband is really very affectionate to me, even in public. He’s always calling me “sweetie” or kissing my cheek, or coming up to me and putting his arm around me. And I do the same for him. And these women said to me, “if you guys broke up, my whole world view would be busted”. I knew my kids felt that way, but I didn’t really know that others did, too. It reinforces to me the thought that other people are watching us.

One of the things that’s always worried me a little bit is that maybe by being so “cute” in public other women might become dissatisfied with their relationships, because their husbands aren’t as affectionate. And so sometimes I worry that I’m making people jealous (not that they want to steal my husband, but that they want what we have). I suppose that’s silly, but so often when wives leave their husbands, it’s because they fundamentally don’t feel loved or pursued, and that leads to all kinds of other problems (it can morph into her resenting him, him responding in anger, cycles of verbal abuse, etc.). And so I don’t want to give anyone an excuse to be dissatisfied.

But these women told me that I showed them what was possible.

I remember on a missions trip a few years ago, Keith and I were staying in the guest house with a number of other women, all of whom were married. We all had different bedrooms but we shared a bathroom and a common room. And one day Keith and I were having a disagreement about something; I’m sure it was insignificant, and I don’t remember now. But afterwards one of the women, who was a little older than me, took me aside and said that watching us resolve that was just such an encouragement to her, because she saw how easily we did it, and how we didn’t stay mad, and hwo we were gracious towards each other.

People really do watch us. Not just our children, but others, too. And in a world of celebrities constantly splitting up, having a good, solid marriage is something that can make others believe that God does make a difference, that lifetime love is possible. They also see how you act to one another: what you do when you disagree, or when something bad happens, or when you’re just having a bad day. They see how you act when you’re not at your best. That really can be a tremendous witness.

So it made me feel honoured at the same time as it made me feel a great amount of responsibility. People are watching us. They want us to succeed in our marriages. Let’s not let them down.

Now, let me tell  you about one area where I was not at my best this weekend. Here’s my problem: I really, really like my children’s friends, both the guys and the girls. And I am having a tremendously hard time butting out where relationships are concerned. I think I get too caught up in my girls’ happiness. I won’t elaborate because I don’t want to spill their issues on the internet, but I think what I’m realizing is that my girls, as they enter their later teens, are going to start to learn patience and trust with God, just as I did at their age. They don’t know what–or who–they want for their future, and they will have to learn to leave it to God. I thought most of those lessons were over for me. When I had to trust God with my son when he was sick, I thought God was finished with that particular part of my character.

Turns out He’s not, because now I have to learn trust all over again: trust that God will lead my girls to the future He wants for them (not the future I want for them), and trust that my girls will figure that out, without me micromanaging. That’s hard. Anyone else ever gone through that? I’d love some pointers!