Have a New Teenager By Friday 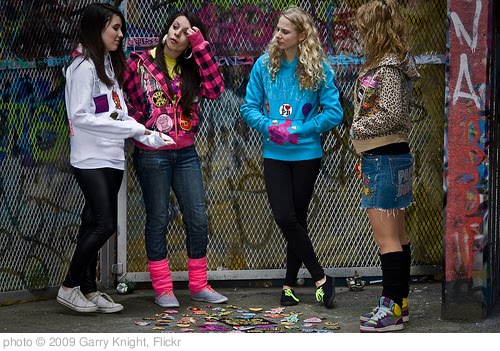 –sitting on my bedside table, she was rather aghast. I was sent it to review it, but she thought the title was ridiculous. You should love your teen!

Indeed I do. But in reading the book, I truly believe that Leman’s “Have a New X by Friday” series is really just a gimmick. And I don’t mean that in a bad way. It’s his way of capturing your attention: if you drastically change the way you act as a parent, a wife, a friend, then you will see dramatic changes quickly in those you love. And he’s right.

And yet in his book, what he describes isn’t so much a 5-day or 7-day course in how to radically transform your house, even if it is laid out that way. It’s more guidelines to how we need to drastically rethink our parenting, and how once we do that, changes will start to fall into place.

Yet these changes really won’t happen overnight, so don’t take the book as a guarantee. If your child is mouthy, moody, and mean, it will take persistence and radical change on your part to nudge him or her out of the corner your child is in. That persistence takes a while. But nevertheless, I truly believe that everything Leman says is right on. I don’t think there’s anything I disagreed with. I actually really, really enjoyed the book, and I loved the “cameo” anecdotes he gave of people who had tried his advice in real life. It just made the book easier to read.

The first half is devoted to completely changing the way you think of parenting, without giving a lot of specific advice of what to do in each situation. The second half of the book goes over all the things you’ll face with teenagers–from acne to fights over car keys–and how to handle those. So he’s both big picture and small picture in one book, and it works.

Let’s look at some of the big picture items first, where I think Leman really excels. In the beginning, he says that the main question, when it comes to raising teens, is not why kids start drinking or smoking or doing drugs or sleeping around. It’s “why do so many teenagers choose not to drink, not to do drugs, not to sleep around, and not to stay out later than their agreed-upon curfew?” Figure that out, and you’ve figured out the secret to raising teens. And then he goes on to show you.

His first big picture item, which is true no matter what age your child is at, is that people behave a certain way because they think it will get them something. In other words, people are purposive: they do things a certain way because it meets a need. So if your child is mouthy, disrepsectful, or dangerous, understand that they are doing that because it is getting them some reward. When your child acts disrespectfully towards you, ask yourself this: what is my child gaining by this? If your son is always ordering you around, asking you “where are my gym shorts?”, or “where’s my knapsack?”, and you’re tired of him being so lazy, ask yourself this: what does he gain by it? And if you immediately go and locate his gym shorts for him, you’re reinforced his behaviour. You’re the cause.

As Leman says, “if it didn’t work, he wouldn’t be using [that approach].” Get that concept, and you’re a long way to being a better parent.

The next concept that really stood out to me, and one that I am guilty of forgetting, is that:

An unhappy teenager is a healthy teenager.

None of us is happy 24/7, and so why should we expect our teenager to be? Going through obstacles is part of life; let them learn that. Your job is not to make your child happy; it is to stand beside them and support them and point them to God when things don’t go right. So true.

But perhaps you’re not a permissive parent, bending over yourself to make your child’s life go well. Maybe you’re the opposite end of the spectrum , expecting your child to do your every bidding. To you, Leman says:

“The point of being a parent is not to control your children; rather, it’s to encourage and partner with them, seeing the long view and the big picture.”

And what is that big picture? It’s that once kids are teens, we should be less involved in disciplining them and more in discipling them. We should be pointing them to consequences and teaching them to see what life is really like, so that they can choose to grow closer to God.

Many people may blanch a bit at some of Leman’s theories. For instance, he’s not a big one on curfews. He doesn’t set a curfew; instead, he tells his kids: “be home at a reasonable hour”, because by this time he believes that they will do what is reasonable (and if they don’t, they don’t get the car next time). But that only works if you’ve been discipling them and teaching them to be respectful for quite a while. It won’t work in five days.

One great area of relief that I felt when I read his book was about computer time. I have always said that kids should not have computers in their rooms, and yet for the last year my children have done just that. Because we homeschool and they take online courses, they work at their desks. And that means they have access to Facebook. But my oldest also has a cell phone, and so she has access to texts and Facebook there, too. Am I a bad mother?

No, says Leman. Technology is everywhere these days. What you need to do instead is teach balance, and help your children make good choices. If your child can’t be trusted on Facebook by themselves, don’t let them on. But if they’re trustworthy, it’s okay. I know my kids are trustworthy (though I still monitor them). The hard part about homeschooling is that they don’t always do their work at specific times, and I sometimes come in and find my oldest daughter texting at different times during the day. I used to get mad at her, but I’ve decided that’s the wrong approach. She’ll be out on her own in less than two years, and she’ll have to learn how to discipline herself.

So instead what we’ve done is set up a school schedule, where she has to get certain assignments done by a certain date. If they’re not done, she has to work well into the night to finish. That way the responsibility is in her hands. If she texts all day, she’ll have to work at night. But she can get them done during the day if she tries hard enough. And I’m not hounding her all the time. I’m not setting up unnecessary rules. I’m just teaching her to be responsible on her own.

It’s a refreshing book, and for parents who are at a loss as to how to respond to eye rolling, talking back, sibling fights, or failing grades, the second half with specific advice on specific things is incredibly useful. But for the rest of us, it’s a good reminder of building the foundation right, and keeping the end in mind. We’re in the business of raising responsible, godly adults. So let’s get to it!

Learn more about How to Have a New Teenager by Friday.