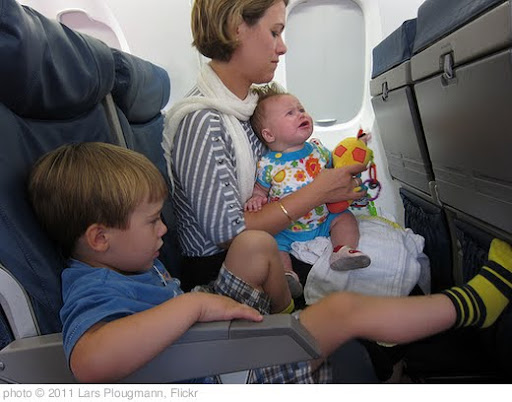 Dear Parents who were sitting behind me on my flight from Detroit to Syracuse yesterday,

I know flying with a baby, an almost 4 year old, and a 6 year old is tough. I know it was a 4 1/2 hour flight, and you were really tired. I know being a parent is one of the hardest jobs in the world.

But the thing about a job is that you DO ACTUALLY HAVE TO SHOW UP AND DO IT. So when your 4-year-old is screaming because she’s bored for the entire four hours, please do not ignore her, because it is very hard for the rest of us on the plane to sleep/read/watch a movie/refrain from hitting you over the head when you don’t seem to realize how disturbing your child is. She wasn’t just whining. She was screaming. I thought I was going to go insane, and I’m usually a very sympathetic person.

I have travelled with children before, and I haven’t generally had a problem, because I think before I get on the plane. For instance, I always:

Buy a few new sticker books. Buy a portable video game or a portable DVD player that you only use for special occasions (like a plane ride). Bring along some Polly Pockets or Pet Shops or whatever your daughter likes. You cannot expect a 4-year-old child to sit still and be quiet on a plane for 4 1/2 hours when she has absolutely nothing to do.

I never went anywhere without at least 10 books. My kids loved reading books, and I would sit between them on the plane seats and just start from one and move to the next. No, this meant that the plane ride wasn’t as fun for me. I didn’t get to watch the movie. But the children were happy and giggling and entertained, and a few times I actually had other kids come to the row and listen in, or I had other grandmotherly types offer to read a book because they enjoyed the ones I was reading so much. It doesn’t take much to bring a few books along.

3. Sit Between the Kids

Don’t sit in the aisle, two seats away from a 4-year-old child who is near the window. Sit between them so you have control. I know you want to talk to your husband who is across the aisle, but please have mercy on the rest of us who are in the plane, too, and make an effort to control the kids.

4. Telling the Kids to Be Quiet in Exactly the Same Voice as You Say Everything Else Doesn’t Work

You may think you made an effort to control the kids and there was nothing else you can do. I mean, I heard you say, over and over again, “Dixie, be quiet.” “Dixie, stop that.” “Dixie, what do you want?” “Dixie, if you don’t stop that you can’t watch a movie.” “I mean it, Dixie, you won’t be able to watch the movie.”

The problem is you said all those things in exactly the same voice as you said, “I’ll have a Diet Coke” to the stewardess, and you said, “Dixie, here are your pretzels”, or “Dixie, do you want a drink?” It made you sound insane.

If you want your child to listen to you specifically and to do what you say, you need to use a different tone of voice sometimes. Just because you say, “Dixie, be quiet” does not mean that you are disciplining Dixie. That obviously meant nothing to her. You say it all the time but nothing happens. And when you say it, and she doesn’t listen, and you don’t do anything, it increases the chances that one of the other passengers will lose it and just come back there and hit you on the head, which is what I know the big guy sitting beside me was contemplating (I had ear plugs, but I still heard the whole thing).

I know you can’t go all ninja on the kids on the plane. You can’t start yelling, and you can’t give them a time out. You can’t suddenly start acting differently than you do at home and expect the kids to behave. That’s why this all has to start before you get on the plane. Start disciplining them at home so they understand your tone of voice. Follow through on consequences so they’re used to listening to you. And then things will go much more smoothly.

5. Talk To Your Kids

This may sound crazy, but you might consider actually, you know, interacting with your children. As soon as you sit down on the plane, in a happy voice (to distinguish from your mad tone of voice), start a running commentary and conversation with them. “Oh, Dixie and Tom, isn’t this fun? We’re going to go up in a plane. Let’s do the seatbelts up. Can you figure out how to do it? Oh, look I can hear the engines. Can you hear the engines? What else makes a loud noise like that? What do you think is going to happen?”

“Wow, we’re starting now. We’re moving. Aren’t we going fast? Do you think we’ll go up in the air soon? Look out the window! Can you still see any houses? What do you see down there?’ And so on. And so on.

Just TALK TO YOUR KIDS. If you start a commentary like this, the kids will stay engaged, and they won’t cry. I talked to my kids non-stop so they were never bored. Yes, it was a lot of work for me, but it’s a lot less work than listening to a child screaming.

I have to admit I almost turned around and told you some of these things in person, but I didn’t, because I was reading an amazing book and I didn’t want to cause a scene. You were already doing that.

I’ve been on other planes with a mom and a baby and a toddler, and one has started to cry, and she was overwhelmed, and I helped. She wasn’t doing anything wrong. But what could I do to help you? You had no toys. No books. You had no clue.

You obviously love kids. You’ve got three of them. But if you want to enjoy your kids, you’re going to have to start interacting with them and talking and playing. Go outside of your comfort zone. It isn’t all about you. Learn how to be a mom.

I wish you luck. And most of all, I hope you’re not flying back east on the 8th.

UPDATE: A number of people have commented on Facebook and in the comments that I was being too harsh, because maybe they were returning from a funeral and were exhausted. But the thing is that the wife and the husband were maintaining a conversation the whole time, about life, about schedules, about just basic stuff from what I could hear. They were ignoring the kid screaming. They didn’t talk about being tired, they didn’t look emotionally exhausted. They looked normal, and they were having a normal conversation, laughing occasionally, etc. Of course kids are going to have meltdowns, and no one minds that as long as the parents deal with it. But these two weren’t even trying, and they certainly did not appear distraught and/or tired. Maybe I’m missing something, but I’ve seen distraught parents, and I’ve helped. These weren’t even in that category.