It’s Tuesday, and today I am madly packing for a 10-day tour I’m taking of Washington state and Indiana! I’m speaking six times over the next two weeks, and if you’re in Washington or Indiana, check out my schedule and see if we can meet up! So here’s my problem: how do I find six outfits to wear when I speak, fit them all in one suitcase, and still have room for other stuff? I think I’ll only be able to bring two pairs of shoes. Sigh.

I figure, though, that as long as I have my knitting I’ll survive.

I thought I’d share with  you some things that I have found interesting lately. First, here’s a post that reminds us that the divorce statistic we hear thrown around all the time–Christians have higher divorce rates than non-Christians–is not as it seems. Great research!

Second, my friend Terri writes such thoughtful posts about the Christian life, and her latest one is probably her most brilliant. I’m still chewing it around, so I’ll have tons more to say on it in a future post. But here’s her take on The Blessings of Interdependence. Here’s the crux of her argument:

In a Christian marriage, where each partner is committed to living a life that glorifies God and honoring the covenant of marriage entered into, this is, in my opinion, the perfect picture of two people dependent on each other, working together toward a common goal. Why then, is there such a revolt against the idea of complementary roles and interdependence?

I believe it’s because of the curse of independence. We like the idea of being in control of our own lives and destinies. Again, this is a perspective void of faith and as such should be unthinkable in a Christian marriage, but think about it. If I don’t have to depend on my husband to provide, he is less valuable to me. If my children are in daycare every day, we eat take out most nights of the week, and the finances are a mess because I am managing “my own money” and leaving him to manage his, I am less valuable to him. This isn’t always the case I know, but the couples I acquaint with who have the most financial troubles are two income couples, which would seem to be contradictory, until you analyze the net effect of the independence curse. I’m not doing anything he couldn’t do, and he’s not doing anything that I’m not already doing. He can drop the kids off at daycare himself and order a pizza. He doesn’t need me for that. If I am providing for myself financially, I don’t need him for that. We are in effect attempting to act as one unit with two heads, a monstrosity, rather one flesh working together in harmony to accomplish a common goal.

Another one I’ll be commenting on soon: Why Young Men Don’t Marry. Great take. Basically, her point is that demographically, some men marry a whole bunch of women, divorcing after ten years or so. Often those women don’t remarry, but now they’re older. And so many young men are pushed out of the marriage market because the “good girls”, who want to marry, are being taken by these older men who want to remarry. It’s interesting, and demographics back up the argument. The question is, what do we do about it? And no one really has a good answer for that one. 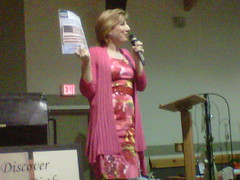 Last thing: I spoke at Cobourg Alliance Church last night, and I thought their idea for an “outreach” women’s event was great, so I thought I’d share it here in case it inspired any of you at your church. They invited any woman in the community who had a home-based business to set up a table and advertise her business. So they had doulas, photographers, midwives, Mary Kay, Arbonne, Pampered Chef, personal assistants, and more with tables.

They didn’t sell anything (because of the church’s tax exempt status), but they gave out business cards and talked to potential clients. I found an interior decorator with some neat lettering ideas for walls that I’m going to buy some stuff from, so the business outreach really does work. And best of all, a ton of women were in the room who weren’t Christian who listened to my talk. So it’s a good way for the church to provide a service for women who need more clients, but it’s also a good way to get women in the door who wouldn’t normally come to a church to hear a good message. 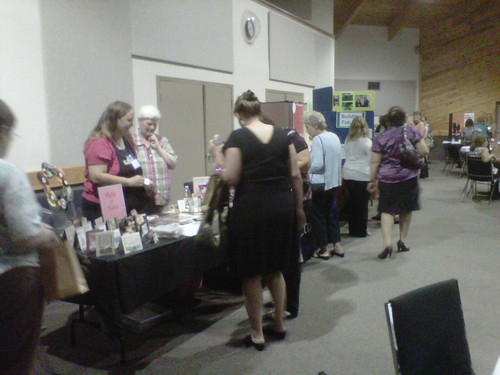 Any great things you want to share in the comments? Or thoughts you have? Let me know!