Summer by the Firelight 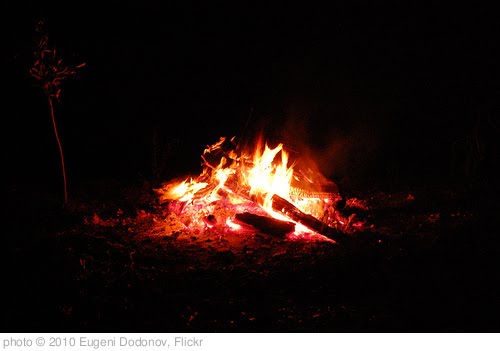 It is never a good idea to pack for camping, spend hours hitching up one’s tent trailer, and then driving for two hours to the campground, only to find that one has left the keys to said trailer at home. It is an especially bad idea to do so when one’s husband, who is the only one capable of setting up said trailer, has to work the next day, and doesn’t have time to drive home to get the keys and come back to set up. Such things often result in the cancelling of the camping trip, and a rather uncomfortable ride home.

Nevertheless, the summer can still be rescued if one reschedules the camping trip, which is what this family did. And we had a glorious week at Charleston Lake doing absolutely nothing, except trying to avoid the poison ivy by the edge of the campsite and the huge black rat snake that lived under the bathrooms, of which the campground seemed excessively proud.

Here’s why I like camping: I can sit in the trailer and read all day and not feel guilty about it in the least. When I’m reading at home I always feel like I should get up and clean something, but camping is like a “get out of jail free” card for me. You can just relax.

Of course, that Protestant work ethic is too deeply engrained to let us completely relax, and so occasionally I would drag my reluctant daughters out of their respective sleeping bags and away from their novels, and head out for a 5 km hike or a short canoe ride. After one such ride, I tried to convince the girls to swim around one of the small islands with me. “The water’s so warm!” I cried. “It’ll be fun!” I cajoled. “When else do you get to swim around an island?” Older daughter, who tends to bear more guilt about letting mother down than younger daughter, eventually waded in, and we started off. Twenty feet later my foot hit seaweed and we were back at the shore towelling off.

We’ve been camping every summer since my youngest was two, and it brings such a sense of family camaraderie. I’ve been trying to figure out the root of such camping goodwill, and the best I can come up with is smores. One can never underestimate the power of a browned marshmallow and Jersey Milk chocolate bars between two graham crackers. Family togetherness is born of such delights.

Not all of our camping trips have been perfect, of course. Many were marred by having a campsite next to rowdy twenty-somethings who had an abundance of beer and a deficit of public responsibility. Trying to tell a dozen drunk young men to shut up at two in the morning is not fun.

My girls also do not enjoy camping with no electricity, as we did this year, since they cannot charge their iPods. I, however, considered that a bonus. Instead we played euchre and Upwords and all kinds of games, actually spending time all together.

The most surreal camping experience I had, though, occurred when sitting around the fire. My oldest daughter would play her guitar, singing along, with my younger daughter harmonizing. They sounded heavenly. And as I gazed at them in the firelight, I couldn’t figure out how we had gotten to this moment. It seems like just a second ago that these same two girls were sitting in those same two camp chairs, singing “Row, row, row your boat” in a round, while Keith desperately tried to get them to keep their fire sticks in the actual fire, rather than waving them about. How did they grow into such young women?

I am now back, doing loads of laundry, and yearning to read another novel. But most of all I am in awe of my girls, even if one of them did forget those keys.