It’s Wednesday, the day when we talk marriage! I introduce a topic, and then you follow up either by commenting or by writing your own post and then linking up! 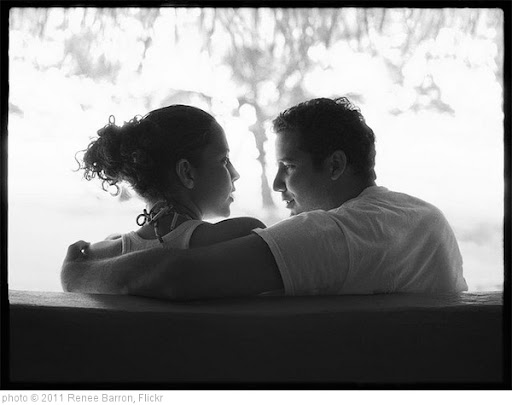 Recently I received an email from a woman who was desperate. She’s pregnant, and her husband wants, for various reasons, to rent a house for the next few months until they can get their dream house in a year. She wants to be settled now, because she’s tired of moving and the baby’s coming. How do they resolve this fight?

Here’s what I told her:

Let me try to sum it up. Your husband is looking long-term: we want to build a house, so let’s just sacrifice for the next few months and get what we really want. What’s a few months?

You’re looking short term: I have a baby coming, I’m tired, and I need to be settled.

Both are very valid perspectives. One of the things that often happens in marriages, though, is that you debate the issue rather than the feelings that are making it an issue. In this case, they’re debating real estate rather than their feelings about the future of the family. They’re arguing about what would be the better housing choice, rather than just talking about their feelings for holding the opinions they do. What I would suggest is that they start talking about feelings and dreams instead.

When you’re in the middle of an intractable problem with your husband, make sure you’re talking about how you feel about the issue, rather than the issue itself. In this case, you could say to him, “I understand that you want what is best for our family in the long run, and I want that to. But I don’t know how I can do this for another couple of months. I am just so tired.”

Now the issue is that you are tired, and need help, and not real estate. If he could find a solution that involved his dream house, but did not exhaust his wife, then that may be a solution that they both could live with.

She could say: I could rent for a few months and build our dream home, but during that time life is going to be so chaotic for me with the new baby, and our current one, and the move, that I couldn’t continue to do what I’ve been doing so far. I couldn’t make dinner every night, for instance. I couldn’t do the laundry. So if we could agree that you do the laundry, and that twice a week we ordered out, or we bought frozen meals, that would be better. And if we agreed that we wouldn’t unpack everything, but just what we needed, and that you were in charge of the contractors during the building, and not me.

When you’re looking at a big problem like this, break it down into what you are willing to do and what you just can’t do. Talk about what you would need from him, and how much more it would cost (in housekeeping, grocery bills, etc.) Talk about who would be in charge of the contractors. If he can agree to that, perhaps she could go along with it?

In this case, the issue is that the woman is tired, and she wants a  place where she can feel settled because the baby is coming. She feels a lot of expectations on you to “create a home” and “keep the family going”, and finds it almost impossible to think of doing that with two more moves coming up. So if she talks about her exhaustion and what she feels is expected of her, and see if she can work out more of a partnership, or get people to help you temporarily, then perhaps his plan is actually possible after all.

Whatever the issue is, identify your feelings, don’t fight his logic. That way you’re giving him a chance to solve your problem, rather than telling him why he’s wrong, and getting into loggerheads because you both have different opinions.

You don’t want to get into a fight about something like real estate when that’s not the real issue. Then you both just dig in your heels and nothing gets done. Instead, try to get on the same page: we want what’s best for our family, but we’re tired and we’re running out of time. What’s the best way to manage our time, energy and money in the next year so that our family will be stronger and better off in the end? Talk about it that way, and figure out what you both need, and then you’re on the same page again.

If you can find a new way to talk through this, then you put your marriage on much firmer ground for the future.

Many marriages get stuck in these conflicts because spouses are in a “win-lose” scenario when it comes to fighting. You both want opposite things, so obviously only one can “win”. You need to find the “win-win”, and to do that you need to identify what the real issue is (feelings) and see if you can figure out creative ways to deal with that so that you both are happy. I think if he could  understand how tired his wife is, and understand that building a house needs to also involve a budget for housekeeping and some frozen meals so she’s not overwhelmed, then perhaps they could be on the same page.

So next time you face a decision where you both hold opposite opinions, try to find the real issue: the feelings. And then see if you can come up with a win-win!

Have trouble figuring out what the real issue is? Do you go around and around and never get anywhere? Listen to this download of my husband and me talking about How to Resolve Conflict!