The Mother Bear Instinct–Why We Need to Protect Our Kids 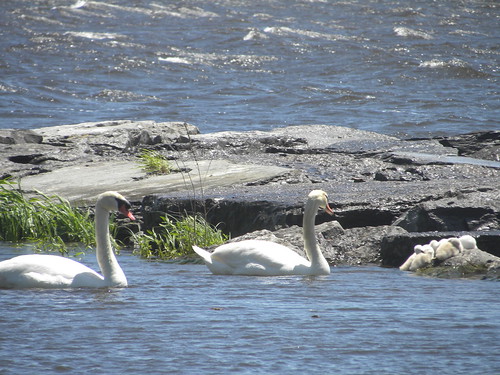 My girls and I took a walk last week on a particularly windy day by the waterfront. The water was incredibly choppy. But just a little ways out from shore swam two swans, right near a rocky barrier, with their little babies, only a few days old, huddled up on a rock. They were protecting their babies from the wind by staying near the rocks that were breaking the waves. Great parents!

Isn’t that a parent’s first instinct: to protect their children? I thought about that when I heard about this news story. It’s a heartbreaking one. In Milwaukee, a mother is complaining because her 4-year-old daughter is repeatedly being attacked on a school bus. She comes home with bruises. Two pairs of glasses have already been broken this year.

She complained to the school, but they did nothing except to blame the fight on a 4-year-old girl. So she called the local news station, who sent a cameraman out to follow the bus on two different days, and caught on tape kids running out of seats, punching each other, and in general causing tremendous chaos.

Read the story (and watch the video) here.

Yet one thing in the story really struck me.

Ms. Edwards says, “My main concern is for her to go to school and learn and be safe”.

As the bus pulls away we follow it. Watching and waiting to see what happens. Back at home the girl’s mother is fighting back tears she says she can’t believe her daughter has to go through this every day.

Edwards adds, “She continues to get hurt. Why? That hurts as a parent”.

Why is a 4-year-old getting on a schoolbus everyday where she is getting bullied?

Now I don’t want to turn this post into a haranguing of the mother. As far as I’m concerned, she’s the best parent in this story. She at least contacted the school and the school board repeatedly, and then contacted the news agency. It doesn’t seem as if any of the other parents have done anything (since the school board said they have had no other complaints about that bus). So here is a mom who obviously loves her child. Pictures of the girl are all over her house, which is nicely kept. This is a good mom.

You do have a choice. Perhaps this woman has fewer choices than many, because it looks as if she is a single mom. Maybe she has no other way of getting her child to school and still make it to work; I don’t know. It’s just another heartbreaking example of why we need two parents.

But you are the parent. You don’t have to make your child go through a horrid situation at school just because “that’s what everybody does”, or “it’s inevitable.” You can pull your child out of school and raise a huge fuss to get them into a different school (it looks like that’s what this mom is trying to do by contacting the news agency).

You can drive them to school yourself, or volunteer to be the school bus monitor. Or, in desperate straits, you can homeschool. Now whenever I mention homeschooling people get upset at me because they can’t for whatever reason, but it is a valid option. We’ve been homeschooling since Becca was in grade 1, and you can remove your children from the school system. I had one friend who took her child out of grade 2 for six months just to teach her how to read, and then put her back in once she learned. The school hadn’t taught her properly, and her confidence was faltering. So she bought Hooked on Phonics, worked through it with her, and all was well.

You don’t have to put up with the things that school does. You don’t have to put your child in sex ed, for instance. If the school says it’s mandatory and you can’t get out of it, don’t make a fuss. Just schedule all their doctors and dentists appointments for those particular times.

If your child’s school is holding a dance for grade 5, your child does not have to go. If your children’s grade 8 class is having a coed sleepover to celebrate the end of the year, you don’t have to let your child go.

We do have choices. We do not have to reflexively just do what everybody else is doing, and think that “this is just terrible, but what other choice is there?”

There is always another choice, and that choice is to just say, “no.” “Enough.”

Those swans knew how to protect their babies, and we need to learn how to protect our babies, too. So don’t go with the waves. Find a buffer, and use it. You’re the parent, and it’s okay to say, “you’re not doing that with my kid.”