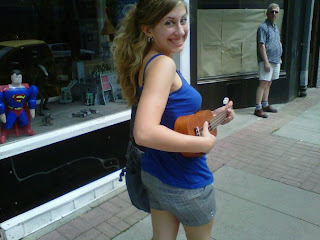 A few things on this Tuesday morning:

First, my  daughter bought a ukelele yesterday, with the money that she makes from teaching piano. That’s four instruments she has (not counting the piano that is mine): a keyboard, an acoustic guitar, an electric guitar, and now a ukelele. She’s really quite good at all of them. And it makes me so proud.

I need to brag just for a moment: for the first time, last Sunday she led worship in church from the piano. I missed it because I was speaking at a retreat, but my husband videotaped some of it for me. We’ve had her in music lessons since she was 4, and I always prayed that she would use music for God. And now she can. She leads her youth praise team, too. It’s just so fun to watch them grow up.

As for the ukelele, immediately after she bought it she was playing it while we were walking down the street downtown in our small town. She figured out “I’ll Fly Away” pretty fast, and Katie and I were singing harmony. It was pretty funny. Three part harmony while we’re walking downtown with a ukelele. She figures a ukelele is a great way to meet people at youth conventions, because who can forget a ukelele? And it’s portable. She has this imitating a geek thing down to an art.

Okay, next item. I figured out what was really bothering me about my post yesterday, about the woman who had an affair, married the guy, and is now back in ministry.

It’s this: I have no problem with people being restored and peaceful and joyful DESPITE sin in their past. What I have a problem with is people feeling peaceful and joyful BECAUSE of the sin in their past. And she talks over and over again in the book about how happy her marriage is now, and how happy the kids are, as if she is happier than she would have been had she not done what she did.

That’s what makes it seem as if she is an advertisement for having an affair, despite the steps at restoration that she took, and that’s what makes me uneasy. Again, I’m not saying that she shouldn’t have a ministry; she isn’t involved in teaching per se, and she does have a gift. And God does forgive. So I haven’t completely figured it out, and I probably never will. But that’s what bothers me: the fact that she is happy because of the sin, and that doesn’t seem like a good message to be giving, even if you’re also saying that you did wrong.

One other thing: I appreciated all the comments yesterday, but Mary’s really made me think. She said that the idea that all sins are equal is a modern theology. Jesus distinguished between sins, and the more I think about it, the more I think she’s right. Jesus said teachers will be judged more harshly. He said towns in Israel would be judged worse than Sodom and Gomorrah because Sodom and Gomorrah did not have the Messiah with them. He said that those who cause a little one to sin are in worse shape than others.

I think there’s a mistaken idea about sin, because we confuse two doctrines. There is no doubt that everyone is a sinner. We all sinned, and those who break one law are guilty of breaking the whole law. Absolutely. But that does not necessarily mean that all sins are the same. All sins, even what seems like minor ones, are enough to make us in need of salvation and unable to get into heaven on our own. But some are more serious. That does not mean that Jesus’ blood is not enough for those big sins; it absolutely is. Yet there are some sins we are especially warned about, like sexual sin and divorce and hurting children. I just find that interesting. I’m not trying to draw any conclusions in this case; I’m just pondering it today.

So I guess I’m no closer to figuring out how to become a more gentle and less judgmental person! Sigh. Maybe I’ll just concentrate on listening to Becca play the ukelele and try to forget all these moral dilemmas.