Have You Left Your Family of Origin? Over the last weekend, many of you probably spent time with extended family, attending Easter services, hunting for eggs, or eating a scrumptious, overly large dinner.

And so extended families are on our minds. They can be wonderful, helping with baby-sitting, setting up a house, finding a job. But they can also be trying, interfering in marriages, criticizing one’s housekeeping or parenting skills, or demanding lots of time and visits.

So let me ask you a question: Have you truly “left” your family?

For this reason, a man (and woman) should leave his father and mother and be united with his wife, and the two should become one flesh.

Before we can really form a close relationship with our spouse, we have to leave our parents. But what does that really mean?

It doesn’t just mean that we leave their house. It means that they are no longer our primary source for emotional support or advice in this life. When we need to make decisions, we don’t consider their needs first; we consider our husband’s. When we need to decide how to spend our limited time, we aren’t primarily concerned with our parents; we worry about our husband.

It’s not. It’s the way God intended it. So let me tell you a story of a woman we’ll call Polly. Polly married young. She was massively in love with Jack, and he with her. They were immature. They had never really lived on their own, except in rather ratty apartments. But they loved each other!

Polly’s parents, however, were appalled at the marriage because no one was good enough for their Polly. They told everyone who would stand still long enough to talk that they doubted the marriage would last–and these were Christian parents! When Polly and Jack moved into their first apartment together, Polly’s parents did most of the work, because it was obvious that Polly and Jack couldn’t handle it, and didn’t know where to put the kitchen stuff.

As Polly and Jack started living their lives together, Polly’s parents were always there. Polly called her mom at least once a day, especially once she got pregnant. Her mother would give her advice on what to do, but most of all, her mother would ask her if Jack was treating her well. If Polly confessed that he played a video game last night instead of eating at the table, Polly’s parents would tell her how awful that was of Jack.

Two children came along very quickly, and Polly’s mom looked after them. She stayed overnight occasionally so Polly could get some sleep. She told Polly that she wasn’t strong enough to breastfeed, so she bottle fed. And Jack felt increasingly left out and would often go “out with the guys” or putter around in the garage.

When they split up after seven years of marriage, Polly announced she was “moving back home“.

I wish I could tell you that story was hyperbole and not true, but I can’t. It happened pretty much like that. Polly never left her parents. Watching them, I always thought the best thing Polly and Jack could do would be to move far away and start their lives together. But they never did.

If you have problems with your husband, don’t talk to your mother about it. Find another mentor who is not invested in the situation. If you have to decide where to spend Christmas, and your parents are pressuring you, remember that your primary allegiance is to your husband. Don’t neglect his family so that you spare yours.

Sometimes we’re still linked with our family not because they’re nice to us and want to help but because of the opposite: we come from a horrible family and we’re still trying to earn their approval. It is hard emotionally to leave. But you must.

The best test of whether or not you have left is to honestly ask your husband if your parents are too much in your marriage–and then trust what he says. Men know if a mom is interfering too much, but often we don’t want to hear it. Believe him. And if he’s the one with the interfering mother, find a way to talk to him about it.

Most of the marriages that I have seen split up have done so in part because of interfering mothers. In one case, it wasn’t that the mother was interfering as much as it was that she made it clear she would love her daughter no matter what, and her daughter should just do what she felt was best. That’s not good advice. I hope that if my daughter ever comes to me and says that she wants to leave her husband, I would march her right back there (unless there’s abuse or something). 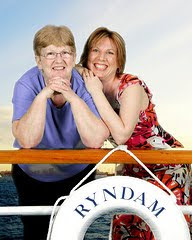 Here’s my mother-in-law and me together. We had difficult relationships with our in-laws initially because I was so unlike them. I was really educated; they were not. But over the years we have grown together. And one thing that made it easier for us was moving to the same town. When we lived out of town we had to come down for extended weekends with the kids quite often, and staying under the same roof is difficult. Living in your own home, and dropping by for a few hours occasionally is much easier. And we’ve found so much we have in common (and we really like travelling together now, too!). We honestly love each other. But in most families, it takes a while to find that good balance with family.

So tell me: what’s it like with your family? With your husband’s family? Have you had a hard time leaving?