Wifey Wednesday: When You Think He’s a Bad Parent

It’s Wednesday, the day when we talk marriage! Today I want to talk about a sticky issue: What do you do when you think your husband is a bad father?

I’ve been talking a bit about parenting toddlers on the blog lately, and in the meantime I’ve received some emails by women who are exasperated with their husbands as fathers. This is a really common conflict in marriage. You think you should discipline one way, and he thinks you should discipline another.

You’re sure you’re right. He’s sure he’s right. You’re at a standstill.

In this situation, instead of looking for a marriage resolution, most people just try to convince the other that they are a bad parent. If you’re at that point, can I ask you this question: what is your desired outcome? Is it that he admit he was completely wrong and that you are completely right and that he needs to change?

When you think you’re right, and he’s morally wrong, though, it’s all too easy to set up a situation where it’s you and your children against him.

You triangulate him out of the picture.

You drive a wedge between him and his kids. And even if he isn’t parenting appropriately, he has a right to a good relationship with his kids without you undermining it.

I’ve been in a similar situation with my husband and my oldest daughter a few years ago. I felt he was being overly harsh with her, and I found myself constantly going into her room and apologizing for what her dad did. After a few months of that, I found that she got mad at him far more easily than she ever had before because she had confirmation from me that he was a bad father. I had meant to just console her and make her feel better about herself, but instead I made the rift between her and her father greater. And even if her father was wrong, she still owed him some respect (again, we’re not talking about abuse; we’re just talking about someone being overly harsh). I realized that she would do better respecting him and loving him, even if he were overly harsh, than she would if I was always telling her what a bad father he was.

Instead, I worked at having fun as a family.

I made sure we laughed together a lot, to try to break up some of this dynamic of the two of them not wanting to be together. And, once we had laughed a lot more as a family for several months, and there was a lot of goodwill between us, I talked to my husband about the fact that I felt he was being too harsh. He didn’t like it, but he listened, and now they’re really close again.

But I realized in all of that how easy it is to drive a rift between a spouse and your children. It’s natural to do; we’re worried about our kids, we think our spouse is wrong and is a horrible parent, and so we gravitate towards our kids and get their affirmation. We start emotionally aligning with our children instead of our spouse, which is dangerous.

When you drive a wedge between your kids and your husband, you don’t actually improve anybody’s relationship, even if your concern is that your children’s emotional health will be harmed with your husband’s attitude. You’re really driving them even further apart.

You also give your husband the impression that he is the “extra” one in the relationship, the one that isn’t needed. The only way for him to now cope is to double down and be even more harsh to try to assert his authority. The thought process that is going through this head now is, “I’m going to make them listen to me!”, even if it’s not at a conscious level. He is fighting to make himself relevant, because he’s being pushed aside.

What I would suggest is that you change the dynamic.

Why don’t you consider yourself an ally with your husband?

He is your husband, after all. Work on that relationship before you even address the issue with your kids. He isn’t going to be willing to talk until he knows that you also respect him, and he likely currently doesn’t feel that you do. You may think that there’s nothing he’s doing that’s worthy of respect, but by having that attitude you’re driving him away and making him even less likely to help.

So why not find some common ground? Try to start doing fun things together. Play board games. Suggest that after dinner you do something fun. Go for a walk (when it warms up). Play Monopoly. Play on the Wii. I don’t know what you as a family like to do, but if you don’t have any hobbies, develop some! Spend some time just laughing together and building memories. Be a family again. It may take some time to think of something like this, but it sounds like you are stuck where you never do anything fun together. And if your kids and your husband never laugh together, they are not going to solve your differences. You simply must find things to do as a family.

Stick up for your husband.

When your children are disrespecting him (even if your husband is in the wrong), tell your kids that they should not be speaking to their father that way. If your children are old enough to negotiate a relationship with their dad, then talk to them. Tell them,

“I know you’re angry at him. But living your life angry at your father is not a good life. You need to find a way to relate to him. So why not start thanking him for one thing that he does a day? Just one thing. Start thinking of him more positively. Be nice to him. You owe that to him. He is your father. And part of the reason you are always fighting is that you don’t give him what you owe him. If you feel hurt by what he says, then you need to go to him and explain that. But think about this: he is far more likely to listen to you if you have taken time to give him the respect and love he deserves as your father. So for the next month, smile at him. Thank him. Give him respect. And once you see the dynamic of your relationship change, then talk to him. Tell him when something he says hurts you. Because you do not want to live your life separate from your dad.”

You need to put the onus on your children (if they’re old enough) to talk to their father and do their part to repair the relationship. Then you can say the same thing to your husband:

“You are driving your kids away, and I know you don’t want to do that. So for a month, why don’t you try just praising them whenever they do something good? Watch for the good things. And as you notice more good things, then they’ll be happier with you and more willing to listen when you have changes you want them to make.”

He is parenting differently from the way you would. That doesn’t mean he’s right; but he is their father, and you are his wife. So try to build goodwill and make sure that you have time to laugh as a family. Do that first. Then talk to them each individually and tell them that it is up to them to repair the rift. Get out of the way. Right now, you are hurting your relationship with them because you are driving him out of his children’s life (even if you are right). 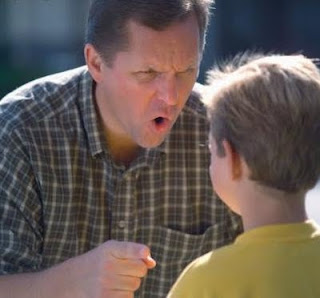 Remember, too, that you may not be right. I know many women who are far too permissive with the children, never disciplining them, and the husband becomes harsh in response. He overcompensates.

Frequently when we have these arguments, that’s the dynamic; we’re overcompensating for each other, instead of finding a happy medium

If your husband is calling your kids names, that obviously is an issue. But you aren’t going to be able to address it until you build some goodwill and show him some respect.

There may be times you do need to intervene to protect your kids from your husband. If he calls kids hurtful names routinely and with a mean spirit, or if he hits them, then you need to take steps to protect them. Talk to a mentor or pastor about this. But often we women label things “abusive” that are not actually abusive. They’re simply different from the way we would do them, and we build up in our minds how bad our husbands are because we think we’re the good parent. So please, before you take harsh action, really look at the situation. Is he abusive, or is he merely harsher than you want him to be?

I have friends who grew up with harsh parents, but they love those parents today because they know that their parents loved them when they grew up. Harshness, in and of itself, does not ruin a child’s life or personality, as long as it is accompanied by love (it is not ideal, but it is also not as psychologically destructive as other things). On the other hand, I have seen many adults very messed up because their parents played them off against each other, rather than presenting a united front and loving each other.

One day your children will move out, and you will be left with your husband.

Your whole life cannot be your children; you have to build intimacy, goodwill, and friendship in your marriage. He may not be an overly willing partner, but you can try just to change the dynamic and have some fun. Show him you respect him. Thank him for things he does do that are good. That will do a lot more for your children’s relationship with him than for you to be always trying to get in between the two of them!