Every Friday my syndicated column appears in a bunch of newspapers in southeastern Ontario. Today’s is for Valentine’s Day, and it’s really aimed at men. But I think you’ll appreciate it (and you can always show it to your husbands)!

Buy guys, if you’re reading this, just a little bit of advice: women do want a Valentine’s Day gift. It doesn’t have to be expensive, but what they want, more than anything, is to know that you care. So think “pamper her” rather than “useful in the kitchen”. Valentine’s Day jewelry or chocolates are always well received, because they say: I’m not buying something that’s for me at all. I just love you and want you to enjoy yourself. Women need that!

And now for some more thoughts: 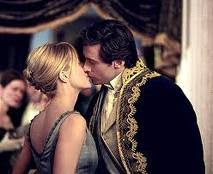 If you want a chick flick to make your wife swoon this Valentine’s Day, guys, Kate & Leopold is an oldie but a goodie. Leopold is an English duke from the 1800s who is inadvertently transported in time to modern day. He holds chairs for women. He stands up when they leave the table or enter a room. He rescues maidens in distress. He is chivalry personified.

My husband has always held the door for me, but after watching that movie, I suggested that perhaps he could start standing when I left the table, too. He said he certainly would, as soon as I stopped talking about politics in public and started speaking only when spoken to. So we let that one go.

Chivalry, though, is largely a forgotten virtue.

While we may not want to return to the days of males popping up and down at the dinner table, aiding and protecting women is actually quite sweet. I travel frequently for speaking, and figuring out how I will transfer my carry-on suitcase from the floor into the crowded overhead compartment always causes stress. The suitcase does not seem to want to levitate on its own, and my biceps certainly aren’t sufficient to stuff it up there. Despite a multitude of males among the plane’s passengers, rarely does one proffer a hand. I am stuck fighting with this decidedly overweight bag on my own.

A few decades ago no self-respecting male would stand by while a female struggled with suitcases. We believed that men should protect women—an injunction only slightly ahead of “men should have to kill the bugs”. So eighteenth century men protected women from the filth that flew out of second story windows every morning when the chamber pots emptied. Nineteenth century men protected them from the seedier side of life, smoking and swearing only in the presence of other males.

Then that came to a screeching halt. I don’t think it was the fault of the male gender, though; I think my own gender is mostly to blame. We wanted to be treated like equals, and thus we labelled all attempts at emulating Leopold’s kindness to be sexism. Men who held out a chair or who took a woman’s coat were glared at, shot down, and insulted. And so chivalry died.

Speaking as one with a graduate degree in Sociology, I, too, used to be insulted when men did small things for me. Did they think I couldn’t manage life on my own? Then, one day, it occurred to me: why would I want to?

Whatever feminists may say, chivalry was not meant to denigrate women; it was meant to elevate them.

It was an acknowledgement that men, though they are stronger, have a responsibility to protect the fairer sex. A man is stronger. He has the ability to push women around simply because of his size (and, in days gone by, his economic dominance). For him to care for a woman instead meant something. It was saying: you’re different from me. You’re worth pursuing. You’re worth taking care of.

What woman doesn’t want to feel that?

Today men and women are supposed to be exactly the same, but we’re not. Acknowledge those differences, and we feel feminine. Treat us the same, and we become mere buddies. And if you’re interested in doing stuff with your wife you wouldn’t do with your best friend, then maybe this Valentine’s Day you had better start treating her as if she is special. Get her those flowers. Open the car door for her. Kiss her hand. Treat her with gentleness and respect, even if you don’t have to. In fact, treat her that way because you don’t have to. And then watch her melt for you.