When you’re deciding what movies to watch as a family (or as a couple), do you consider the broader biblical worldview? Or do you focus on profanity and nudity?

Or, to put it another way, do you mind swearing in movies? I heard a pastor ask recently, “how much swearing do you put up with before you switch the movie off?” And in the comments to my column last week about The King’s Speech, that was one of the major topics for debate! So I thought I’d try to explain my philosophy–not because I think it’s the only right one, but because I do want to show that I’ve thought this through. I think those who choose to say “absolutely no swearing” are perfectly entitled to that. I just want to walk you through my thought process about it.

The night before the pastor asked this question Keith and I had watched Gran Torino, a Clint Eastwood movie I completely did not want to see. I watched it for the hubby. And it was just plain amazing. And I was contemplating showing it to the kids, despite the swearing (I eventually decided not to because the language is just too much, especially the racist stuff. But I did think about it).

Profanity in movies, in and of itself, doesn’t bother me that much. It depends on the context.

I find it jarring when there is no purpose to it, when you’re watching a movie and every second word is a swear word, as if the writers couldn’t figure out how to do dialogue. But sometimes swearing has a purpose and it makes sense in the movie.

Gran Torino is one of those movies. I don’t recommend everyone see it, by any stretch of the imagination, but it follows the life of an older, retired widower who is very raw, dealing with the new immigrants (whom he hates) who have moved into his once middle class neighbourhood. They don’t take pride in their lawns the way he does. They eat weird food. He despises them.

And then, slowly but surely, he gets to know them. And he sees a different side to the story. They begin to change him, until the final scene which is extremely Christian. In fact, the story is the evolution of his faith, and walking back from cynicism and selfishness to hope, generosity, and love.

Is there swearing? Yep. And some of it is gross. It’s racist, it’s sexist, and it’s jarring. But it’s also who he was, and it changes as the movie goes on.

The reason I wanted to show the movie to my teenage daughters (and I still may, at least to my older one), is that it is such an interesting portrayal of the problems in many immigrant communities with gangs, the lack of male role models, and the lack of hope. If we were to understand these things, I think we could do more to help. It would move us to empathy, as it moved Clint Eastwood’s character. But more importantly, it shows a real-life evolution of someone from a gutter mentality to a selfless mentality, because God touched them. 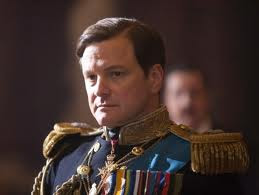 Recently I also saw the movie The King’s Speech, which was just stupendous. It is not often they make a movie that praises duty and honor, and shows someone trying so hard to do his duty–even if he doesn’t want to. The story follows King George VI, the current Queen’s father, who was not born to be king. His brother was, and as the movie shows, this brother is a selfish womanizer who cares nothing for duty. He abandons the throne to marry a divorced woman, and George (or Bertie as he is called), is thrust on the international stage.

The only problem: he stutters. Horribly. How can he make speeches if he stutters?

The movie follows his own transformation as he accepts his role, makes peace with his past, and decides to set the stage for his own life. With the help of a therapist, he not only learns to speak, he finds his voice.

Why the profanity? He doesn’t stutter when he swears, so the therapist has him swear. Other than that, the movie’s pretty clean.

Like Gran Torino, the movie presents a biblical world view. Selfishness is looked down upon; selflessness is inspirational. Learning to do one’s duty and to sacrifice oneself is presented in a positive light; caring only for yourself is presented in a negative light. Those who love have fuller lives; those who care only for themselves have shallow lives.

For instance, two weeks ago Keith and I rented the movie Forrest Gump, intending to show it to the kids as part of the history we’re doing in school. It covers the 60s-80s so well, we thought it would be fun to watch.

But since it’s been so long since we watched it, we thought we’d better screen it first.

I’m glad we did. I decided not to show it to them. When I saw it first, I loved it. This time around it left me empty. Yes, Forrest, in many ways, is a Christ figure. He sacrifices himself over and over for people. But the central idea of that movie is that our lives are random. Good things just happen to Forrest, but there’s no reason for it. Yes, there is some notion of God in the movie, since Lieutenant Dan “has it out” with God during the storm. But in general, life is random. It’s a box of chocolates. You never know what you’re going to get. And you just float through life, making the best of it, like the feather that floats through the beginning and end sequence.

Some say the feather represents grace; I don’t think so. I think the movie portrays something far more random. Hedonism is shown to be empty, but an alternative isn’t really offered. Forrest ends up fathering a child without intending to, but it’s never shown that this was wrong. Jenny lives for herself her whole life, only coming to Forrest when she’s dying. I just thought it praised the emptiness of the 60s and 70s too much. I also forgot about how graphic the sex scenes were in it!

It is not whether or not a movie makes you feel good, or whether or not it has no swearing, that makes it a “good” movie for a family (with teens) to see. It is whether or not the movie portrays the world like it really is, and whether or not the movie gives a moral message the Bible would agree with. Is wrong always wrong? Is right always right? Is selfishness rewarded, or not? Is life portrayed as chance, or hopeless, or is there a guiding Hand? At the end of the movie, do you want to act in a more godly way, or are you tempted towards a less godly one? I am convinced that even movies without religious overtones can move you towards more godly decisions.

A movie doesn’t have to be openly religious to have a biblical worldview.

Schindler’s List was a movie with a biblical worldview, though the hero was hardly Christian. The Family Man, with Nicholas Cage, has an incredible biblical worldview, though again, the main characters don’t claim any religious adherence. The key is: does the movie portray the world the way it is, and does the movie, at the end, make you feel more like acting in a godly manner? It’s not about whether a movie is clean or not, but about whether it moves you towards God or not. To me, too many “fun” movies don’t have a biblical worldview, like The Proposal, or 27 Dresses, or many of the fun things we watch because “they’re not too bad and there’s not much swearing”. I think that’s worse.

I think we can fall into a trap of ticking off boxes to judge a movie: does it have swearing, or sexual innuendo, or violence?

I would rather look at the movie as a whole. Of course, there are some lines I will not cross, but I wouldn’t want to dismiss movies out of hand too quickly, because stories can be important vehicles to teach truth. Jesus used stories, and one of the ways in our modern day that stories are best told is through movies.

I would rather my girls watch a movie that’s a little raw but reflects real life and real morals than a movie with a PG rating that doesn’t. I didn’t show them anything with any suggested sexual content or swearing until they were at least 12, so of course I’m talking about teenagers here. But with swearing, it’s not like they haven’t heard it. Maybe you’ve been able to shelter your kids so they don’t hear swearing, but ours have heard it since they were babies in their extended family, and so we couldn’t shield them even if we wanted to. And they have great relationships with their extended family members anyway. If you were able to shield your kids, perhaps you may think differently, but I wouldn’t outlaw all movies just because of swearing. Movies have a way of telling a story so well, and uplifting the soul, and if we automatically declare all movies off limits that have even a little swearing, we may be stealing opportunities from our families to get into some great discussions and to feel very uplifted.

If a movie is inspirational, and would generate great conversation and thought, but has some swearing, I’ll let the kids watch it. If it’s cute, and has no swearing, but tells the opposite message of what life is supposed to be, I’ll say no. Why waste time watching a “cute” movie that doesn’t really portray anything real, or life the way it’s supposed to be? Much better to have a family night without a movie at all, then.

That’s where I’m at in the movie debate. What do you think?