Which Parenting Culture is Best? 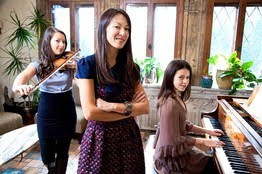 Image by Erin Patrice O’Brien
Amy Chua created quite a stir when she published an article in the Wall Street Journal on Saturday explaining “Why Chinese Mothers are Superior“. She says,

Here are some things my daughters, Sophia and Louisa, were never allowed to do:

• be in a school play

• complain about not being in a school play

• choose their own extracurricular activities

• get any grade less than an A

• not be the No. 1 student in every subject except gym and drama

• play any instrument other than the piano or violin

• not play the piano or violin.

She goes on to explain why Chinese parents are so strict about things like practising and doing homework:

What Chinese parents understand is that nothing is fun until you’re good at it. To get good at anything you have to work, and children on their own never want to work, which is why it is crucial to override their preferences. This often requires fortitude on the part of the parents because the child will resist; things are always hardest at the beginning, which is where Western parents tend to give up. But if done properly, the Chinese strategy produces a virtuous circle. Tenacious practice, practice, practice is crucial for excellence; rote repetition is underrated in America. Once a child starts to excel at something—whether it’s math, piano, pitching or ballet—he or she gets praise, admiration and satisfaction. This builds confidence and makes the once not-fun activity fun. This in turn makes it easier for the parent to get the child to work even more.

She also quotes a study that shows that 70% of Western mothers think stressing academics too much is bad for children, whereas virtually no Chinese mothers think that way.

Now, I think talking about culture and parenting is a major hot potato, and so I’m not even sure why I’m going to attempt to answer Amy in this blog post! But what I’d say is that there are good and bad to both the Western culture and the Chinese culture (which, as Amy says, really is more of an Asian culture).

In Chinese culture, the family is of paramount importance. In fact, in almost all non-Christian or pre-Christian societies, the birth family took precedence over the marriage relationship. You could not shame your parents. You had to do what they wanted. You married whom they wanted; you took up the career they wanted you to; you excelled so that they were made proud. Your own wishes weren’t really considered; that was subservient to what the family wanted. And thus “saving face” is a huge issue in Africa, in the Middle East, and in Asia.

In contrast, in the West we embraced the idea that the individual is the most basic social unit, because we saw salvation and one’s relationship with God as an individual, rather than a familial, phenomenon. Because people’s individual salvation was what was important, people’s choices thus became important. And we reared our children so that they could make their own choices (though obviously there are exceptions). We stressed duty far less than we stressed self-actualization. You had to figure out what you were good at; what you, as an individual, were meant to do.

Thus, though God gives authority to parents, we never saw that authority in the same way as Asian parents or parents from other cultures did. We always saw God as the ultimate authority. And children had to follow God, even if it meant doing so in a way different from their parents.

Now, here’s the problem: what happens to a culture that believes that children should find their purpose, should make individual choices that honour God, when they then take God out of the picture (as we have done)? We have these vestiges left, but the core is gone. And what happens is that we give up on parental authority altogether and focus instead on self-actualization. We want our kids to “feel” good. We want them to be happy. Sure, we want them to make good choices, but we want them to make those choices so that they are happy, not so that they have meaningful lives. The Chinese, as Amy says, focus far less on happiness and far more on success and mastery.

What is the better culture? I’d say neither, really, because neither inserts God into the picture. The Chinese may raise more successful children, but they don’t necessarily understand their need for salvation or that human effort is not the main goal in life. And the Western parents have forgotten that happiness is really secondary, too.

If I were to put forth a proper view of parenting that encompassed the best of both worlds, but focused on truth, this is what I would say:

God has put parents on this earth to train and lead children so that, when they are adults, they will be able to confidently live out His plans for their lives. We must first and foremost raise children to love God and respect and obey God. But we cannot let it stop there, because that secodn part is also important. They must be prepared to live out God’s plans, and they won’t do this well if they aren’t equipped. And since we don’t know what God’s plans are for our children’s lives, we have to make sure that we’re equipping them for anything.

So make sure they do well at school (or at least as well as they are capable of). Put them in music lessons if they are at all gifted and you can afford it (the church needs worship). Teach them how to do chores around the house. Teach them to be good with money (and require them to budget and to give to charity from a very early age). Teach them to respect adults and not to give in to the culture. Don’t let your children watch a lot of television. Don’t let them be seduced by our culture.

In many ways, that last paragraph sounds like a Chinese mother, and perhaps it mostly is. We have to set up a family where kids are expected to at least try hard and give their best effort (though not necessarily to excel, if they just weren’t hard-wired that way). But it’s the reason for this that differentiates the Christian family from the “Chinese” (in culture) one. We’re doing it not because we want to force our children to succeed, but because we want to equip our kids so that they can make the most difference for the kingdom.

We have many Chinese and Korean friends in our community, and interestingly many of them moved to the West specifically to spare their children the pressure that children get in school in their home countries. These families are Christian, and while they believe in excellence, they don’t believe in pushing kids so hard. But all of these children do play the piano! They all do well in school. They’re very polite and bright.

As I said, I don’t like commenting on different cultures! But I thought the article was interesting, because I felt rather empty reading it. What good is it to force your children to succeed, and to operate your house as if you were a drill sergeant, if there isn’t a higher purpose? But we in the West shouldn’t feel smug, as if we’ve got it right. We are spoiling our children and raising a whole generation of lazy kids who are not living up to the potential that God has put in them. I think the answer is not to look at other cultures, but instead to get back to God and ask Him what the purpose of parenting is.

And people, let’s equip our kids. Let’s start expecting them to act appropriately and independently. And let’s stop letting the media steal them. That’s not a cultural vision of parenting; that’s a Christian one. And we in the West, of all racial backgrounds, really need to step up to the plate.

UPDATE: I continue the conversation, after all of your great comments, here.