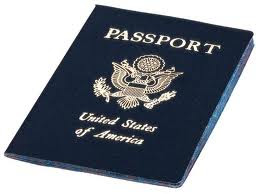 While the big news is still the tragedy in Arizona, another story hitting the airwaves is the change in passport applications. No longer will there be Mother and Father, but Parent 1 and Parent 2, reminiscent of Thing 1 and Thing 2 from The Cat in the Hat.

Well, while you Americans are gnashing your teeth, we Canadians went through this three years ago. And I dug around and found the column I wrote on the occasion. I thought you might enjoy it (it’s still one of my favourites).

This week I joined the frenzy of Canadians applying for passports. With our southern neighbour’s change of rules, multitudes are scurrying to secure the over-priced blue booklet, complete with the photo in which one must not smile, but must attempt to look like a terrorist. I didn’t think the process would be that difficult, as I am not new to such applications. But this time around I found myself rather perplexed by some of the questions.

Name and address: so far so good. But then they started getting really nosy. How much do I weigh? they wanted to know. Well, that depends. Am I PMS’ing, or not? And do they want to know how much I look like I weigh, or how much I actually weigh, because the two are not necessarily synonymous. I can hide stuff pretty well.

Nevertheless, I filled in my weight, rounded down to account for wishful thinking over the next five years, and then moved on to height. I’m 5’5”. How many centimeters is that, anyway?

Having to record my daughters’ heights, though, was an exercise in futility. My oldest has grown an inch and a half over the last month. Her height right now will not be her height when the passport office finishes with our applications. I really think you should be allowed to put down ranges on height and weight. At least it would be closer to the truth.

Nothing, however, prepared me for the next line of questions. They wanted to know my hair colour. That is a dangerous thing to ask a woman. This is an Official Government Document, so I have to be accurate, but the truth is I have no idea what my hair colour is. Do they mean natural hair colour? I think I’ve forgotten. If they want me to be precise about my colour right now, some of my highlights are Wella #5RV, and some are Wella Bleach Blonde, but I’ve always wanted to try Wella #5RR, and sometime in the next five years I’m bound to. But all that won’t fit in their little box.

They want you to write “Blonde”, “Brown”, “Black”, “Red”, or “Grey”. I think a man wrote the passport applications, because men think in black and white terms, so to speak, when it comes to colour. For instance, most men will call navy, indigo, aquamarine, teal, turquoise, cobalt, and azure all “blue”. But women know that’s far too constricting. It’s the same with hair colour. My one daughter is blonde. My other is not. But your guess is as good as mine whether she’s closer to blonde, brown, or red. It really depends what light she’s in. Maybe I should just take some leftover Wella Bleach Blonde and pour it all over her head and then we could be done with it.

As mystified as I was by these questions, though, I was really thrown through a loop when I came to the “parent” section of the children’s applications. It used to be “Father” and “Mother”. Now it’s “Parent” and “Other Parent”. So I am officially “Other Parent”. Just doesn’t have the same ring to it as “Mommy”, does it?

In all government paperwork, the words “wife” and “husband” have been stricken in favour of “spouse”, and “mother” and “father” have disappeared in favour of “parent”. But I am not my children’s “Other Parent”. I am their mom, and I have the stretch marks to prove it. Besides, mom is personal. It means loving, and caring, and hugging, and kissing boo boos. Parent does not. I know that family forms are changing, and the government wants to accommodate them. But it seems sad to me that my unique relationship with my children is now officially erased, and turned into something generic.

When I arrived at the box where I had to state my relationship to the child for whom we are applying, I was supposed to write “parent”. But I didn’t. I wrote down “mother”. I may not know my hair colour, and I may be in denial about my weight, but I do know who I am. I’m a mom, and I always will be.