Ever get the feeling you’re living in a parallel universe? Where the things that you see can’t possibly be true?

I had that feeling this week. My husband is a physician, and as such, the Canadian Medical Association sent him a ton of their consumer magazines to put in his waiting room. And there, on the front cover, was prominently advertised the article “Pole Dancing: For Fun and Fitness”.

I thought this was strange, so I tweeted about it. And the CMA tweeted back.

Get a load of this (my initial tweet is on the bottom. Theirs is on the top): 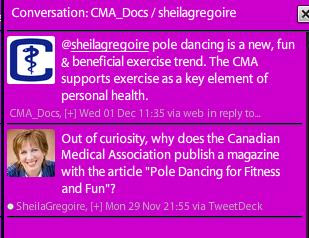 First, they didn’t pick pole dancing because it was a great exercise trend. They picked it because they wanted to put something about sex on the cover because sex sells.

Second, pole dancing is something which married couples are not exactly famous for. It’s what the young twenty-somethings do in their promiscuous days. Pole dancing = promiscuity in most people’s minds. I mean, honestly, how many of you with kids own a pole in your bedroom? Can you imagine what those kids would think? “Cool! Mommy and Daddy want to play fire station! Can we slide down the pole, too?”

So is this really something the Canadian Medical Association should be touting?

Don’t get me wrong: I have nothing against having fun in the bedroom as a married couple. But that’s not what this is about.

I haven’t figured out how to respond yet to that tweet. If you have any good response that’s under 140 characters, leave it in the comments! Or just tell me what you think!