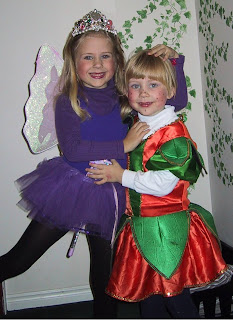 Our little corner of the world has seen a lot of horror and grief in the last few weeks, what with the Russell Williams trial, the heartbreaking accounts of depravity, and the media circus. So I think it would be rather fitting if we swore off horror for Halloween. Instead of celebrating ugliness, why not celebrate ballerinas and cowboys and princesses and superheroes, with a few baby bunnies and baby bees thrown in? In fact, I’m willing to put my money where my mouth is, and I’ll announce a chocolate ratio: anyone at my door wearing a happy costume gets three pieces of chocolate. Anything ugly gets only 1.

And if any parent dresses their little girl in something that looks like stripper wear, I’ll still give the kid a mini-chocolate bar, because they’ve already been punished enough by having such a degenerate family. But I’ll be sure to send the evil eye the parents’ way.

I’ve never been that fond of Halloween, ever since my grade three year when I pranced into school in my Wonder Woman costume and all the boys laughed at me. Coming up with a costume that other kids would think was cool was always way too stressful. And as a parent, creating a costume my children wanted to wear but which was also warm enough to protect them in the October slush gave me migraines. I’ve always had that suspicion that Hallowe’en is just a big racket anyway, promoted by candy and costume companies, forcing us to shell out big bucks so our kids can freeze one night and gorge themselves the next.

Thus, I was deliriously happy when my children reached that magical age of twelve, when I proclaimed that trick or treating was now a thing of the past. Hitting up neighbours for candy is cute when one is six; when one is fourteen and can afford an iPod touch, it’s not called cute anymore. It’s called extortion.

What makes it even worse is that often these teens arrive sans costume. Maybe they’ve managed to throw on a wig on or some heavy black eye makeup, but that’s it. Why should I give a teenager a little chocolate bar just for showing up at my door, when they haven’t even put any effort into it?

If teens want to dress up and have a party for Halloween, by all means, go right ahead. But do it inside someone’s house, not out on the street. Get your friends together, pool your money and buy candy on sale, and watch some movies or play some games. Just keep it indoors, not out on the street where you’re scaring four-year-old ballerina princesses to death.

The only teens I don’t mind seeing at my door are those who are supervising younger siblings, so that Mom and Dad can stay at home, listening to their own doorbells and giving out their own candy in peace. Those teens are contributing, they’re not mooching. Interestingly, the teen supervisors almost never ask for candy. But I tend to give it to them anyway, because I appreciate that they’re being generous with their time, too.

Hallowe’en is an upside down night. We let kids go out in the cold without coats; we let them take candy from strangers; we let them eat too much dessert. We’re already big hypocrites. So let’s at least put some parameters on it. No teenage—or adult—trick or treaters. No costumes that sexualize little children. And no costumes that turn rambunctious kids into demons. From one subdivision mom to all the other fed up moms out there, let’s join forces and enforce some decency once again. And maybe then we’d have some chocolate left over to munch on, all by ourselves.