The Marketing of Bibles

In my adult life I have had three Bibles. I started with one I had when I was 16. It was a NKJV study Bible, and I used it constantly. I underlined verses and coloured verses and wrote in the margins. I could find anything in that Bible. 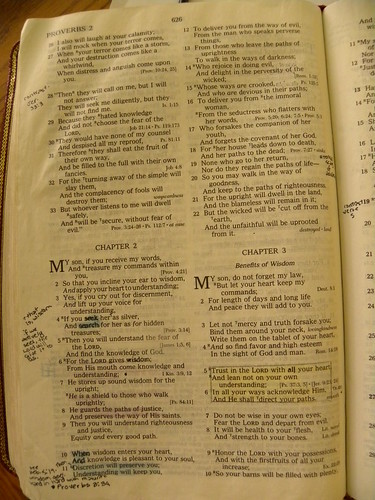 But eventually I just didn’t want NKJV anymore, and I switched to an NIV study Bible. I used that briefly, for about three years, before switching to the Bible I have now, an NRSV which comes–this is the best part, and really why I bought it–with huge margins all around so that you can make lots of notes. I believe in marking up my Bible. It’s how I know what I’ve already read, and what I’ve already thought, and I find my notes useful when I read again. 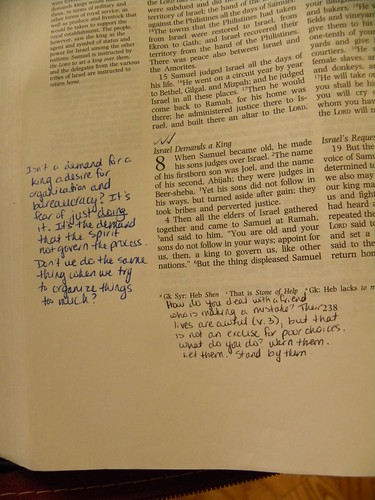 Most people, I find, do only have a few Bibles because we get attached and it’s hard to part with them. That’s your whole history of your spiritual journey in one book! How could you start fresh? What do you do? Move all your notes over?

And yet, even though we feel that way about Bibles once we’re adults, we don’t expect to feel that way when we’re children or teens. Bibles are marketed with the assumption that kids will buy a new one at each new stage in their lives. They’ll have an easy one with pictures, and then a slightly harder version, and then they’ll go through several different teen Bibles before they reach adulthood.

I think this is done more for the marketing of Bibles than it is for the spiritual health of children. I do believe in having young children who can read–let’s say 7-9–read from an easier version, like the New Living or the TNIV. But once they’re reading novels, I don’t see why we don’t just let kids graduate to the Bible that they will start using in their spiritual faith. I did at 16, and I could have done so at a younger age. Pick the version that you like to read and memorize from, and buy that for your 10-11 year olds. Or save it until they’re 12 and make it into a big birthday present that’s meaningful.

I was reminded of the importance of this recently when my daughter showed me a teen Bible that she won for free (as in we didn’t pay good money for it). It’s a lovely Bible, pink and brown, that’s very attractive. But what we didn’t bargain for was what came inside of it.

There were quizzes about “My Favourite Date” or “What I Look for in a Boyfriend”. I can’t tell you them all now because in disgust Rebecca ripped them out. Why is a Bible encouraging young teens to think about dating? She thought it was stupid. 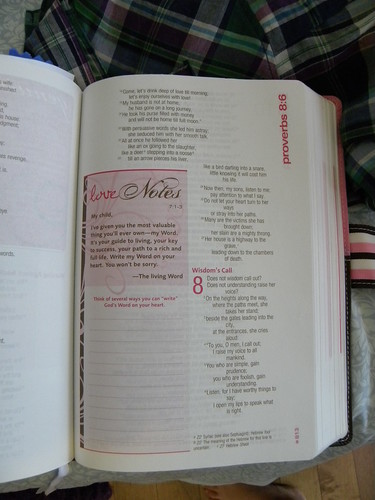 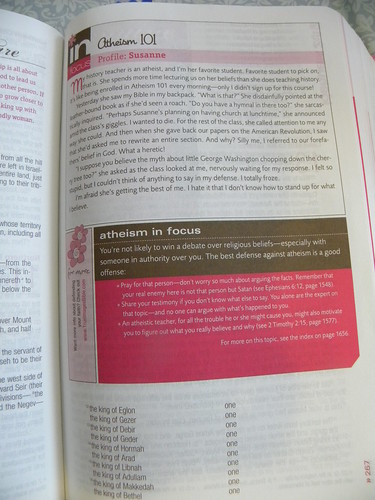 I have no problem with sidebars that list the miracles of Jesus or the parables of Jesus or anything like that. I find such things helpful study aids. But sidebars in any Bible–whether for children or teens or women–that are more quiz based or devotional based I find strange. It’s not that I’m against devotions; it’s just that those sidebars usually give a particular slant to the story or passage that you’re reading, and I’d rather let God’s Holy Spirit talk to me at that time. If I want to read a devotional, I’ll get a separate devotional, thank you very much.

I know that companies just need to make money, and hence they’re marketing Bibles like this. And I do believe that everyone should have their own Bible so that they can make their own notes in it.

But I would just caution you before you buy your next Bible or you or a family member or friend: what do you want your Bible for? If you just want something to use as a study aid, then you don’t need one specifically for women or teens or kids or fishermen or moms or golfers or anything. You just want a Bible with margins for leaving notes and with the occasional map or chart.

And such a Bible is good regardless of gender, age, class, nationality. It speaks to everyone. After all, that’s what it was written for. Maybe it’s time we got back to that!

P.S. to any Bible companies reading this: Please make more Bibles with big margins for notes. Thank you.