Should We Celebrate the Modern Family? 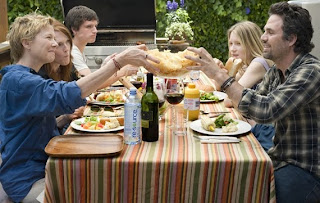 My children have been busy at a practice all weekend and today for an international Bible quiz meet in Calgary next week, and I’m sitting here in a hotel writing as many columns as possible in a three day period. It’s going remarkably well! Got 11 done so far; four more to go.

Over lunch Saturday I decided to switch on the TV, and regretted it almost immediately. Most shows are inane, and the commercials are worse. But one commercial which I keep seeing is for “The Kids Are Alright”, an “invigorating and heartfelt” look at the “modern family”.

Here’s how they define a modern family: married lesbians used a sperm donor to each conceive a child. Those children are now teenagers. The daughter tracks down the sperm donor, and chaos ensues.

What I am glad about, though, is that they are showing the quest for the sperm donor, because they’re showing that it shouldn’t be taken lightly. It’s become normal in our culture to assume that sperm donation is a viable option if you want to have a child and your husband is infertile, or you’re in a homosexual relationship. But why use a sperm donor? Why not just adopt then?

And thus we have the plot of the movie, where the teenage girl tracks down the sperm donor, who appears to be a bit of a carefree loser who was in it for the money.

I assume it all has a happy ending, but why Hollywood should call this the “modern family” is beyond me. Most families look nothing like this, no matter how prevalent Hollywood tries to make them seem. And that’s a good thing. It is chaotic to create a child who will never know one parent. It is one thing to adopt a child and take them away from their biological roots; that child already has been separated by necessity, and that child needs a parent now. But to create a child deliberately? That is entirely a different story.

And then to assume that that child has no need of both parents, or has no need of both a mother and a father, that love is all that matters, is to disregard millennia of knowledge of human behaviour. The mother and father perform unique roles in the family, and are not interchangeable. At times a single mother must raise a child, but we would never say that this is the ideal. And yet with homosexual couples we’re supposed to ignore the problem of the lack of the other sex parent and announce that all is hunky dorey to show that we support the lifestyle!

This really has nothing to do with whether or not you think homosexual relationships are fine (I have an opinion, obviously, but that’s not pertinent to the issue at hand, and I’d really appreciate it if the comments don’t go in that direction, because I think that can be needlessly hurtful). It has everything to do with the rights of a child to be raised by his or her biological parents, or by the next best substitute. And as soon as we begin to say that the substitute need not be an actual mother or an actual father, but could be absolutely anybody, then we destroy the notion of “family”. All we have left is love, and love is not all a child needs.

As we give up on marriage and replace it with voluntary adult relationships which are not necessarily lifelong, that child loses the sense of community that a committed marriage relationship used to give him. Cohabiting couples who have children, for instance, are six times more likely to break up than married couples with children. And homosexual couples are about twenty times more likely to be unfaithful in their relationships, or to break up, than heterosexual couples. Heterosexual marriage matters.

So perhaps Hollywood wants to believe that this is the modern family, but I don’t believe it. It’s a modern reality, but thankfully it’s still not a common one. And I hope we don’t give too much credence to this movie, because I want to believe that we can go back to what is best for the child, not what is best for the adult. We are, after all, adults, and we should start acting that way.