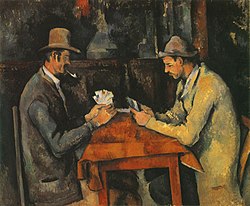 My husband comes from a very competitive family. I love playing cards with them, but as a child Keith remembers a lot of tension around games, so he stopped playing after a while. My mother experienced something similar. Sometimes people are such sore losers, and take winning and losing so seriously, that it wrecks it for other people (and can even be quite disruptive).

I read a post recently by a mom who is worried that her son is getting too caught up in winning. The mom reports:

My almost 7yo boy likes to play games. However, if he makes a wrong move, answers wrong, or loses the game, his face is immediately red and the dam breaks with floods of tears. He is an only child, so no siblings to help him with this.

I’ve tried lately to play more games with him to work on his attitude but I am at a loss. We’ve talked about winning, losing and having fun playing the game, it’s okay to want to win, but it’s important to be gracious whether you win or lose, etc. etc. – but nothing works. His personality is dramatic and emotional “I can’t believe I missed that!”. Human pride at its peak. He bounces back quickly, apologizes and wants to play another game – but I’m at my wit’s end.

So what does she do?

Personally, I wouldn’t make an overly big deal out of it yet. He’s 7, and part of being young is learning how to (a) identify your emotions and (b) deal with your emotions. Many people are competitive, and that, in and of itself, is not a bad thing. Apparently boys who are competitive tend to do much better in school, and schools that encourage competitiveness tend to bring out the best in boys. Especially with males, it’s often wired that way!

The problem, as this mom has identified, comes when they start judging themselves in terms of “works”, or start feeling proud of themselves for it. Here’s a way out, for those of you who are having the same problem!

After playing a game, I would reinforce what you know is true about your son, and reward him for TRYING, not just for accomplishing. In your house, keep the language of trying more positive than the language of winning. So say “congratulations for putting in such an effort”. We do that in our homeschool, too. If they try at math, but don’t do well, they get praised much more than if it was an easy lesson they breezed through.

Do this in every area of your child’s life. It’s effort that counts. To God, the heart matters, and then He’s the one who brings the fruit, not us. So we should never take credit for our successes, but only for the effort we put into it. Try to do the same thing with your child!

2. Keep talking about how God sees your child.

Just keep talking about how God sees us. I wouldn’t lecture him at 7 on the psychology of winning, because I don’t think kids that age get it. I would, however, surround him with truth. Tell your children that God made them for a purpose. Tell them that they are the way they are for a reason. Tell them that God put them together in exactly that way because they are perfectly made for what He has planned. Not everyone has to win at everything. But even those who are amazing card players or basketball players or Monopoly players lose at life if they don’t live out God’s plan. That’s what counts. Talk about that all the time, and as your children grow up, they’ll get it!

When they’re teenagers this often hits even harder. Kids who don’t feel good at things get very despondent. They don’t see what they’re worth. Fill your home with stories of ordinary people that God used simply because they were willing. Talk about how what matters is not ability as much as willingness and obedience. The world is full of talented people who have made a mess out of their lives. Mother Theresa wasn’t particularly talented at anything. She just made herself available. Praise these things.

And for that reason, don’t make sports a huge deal in your home. If your husband is a sports fanatic, I suppose that’s okay (though I don’t understand it :). But remember that sports can reinforce the wrong message. Our heroes are not athletes; our heroes should be those who use what God has given them (athletes can do this, of course, but that’s not usually what we pride in them).

3. Teach your child to handle disappointment.

Many children have really violent emotions. It hits them so hard they scream, or pick up the board and fling it across the room. It’s not that they’re bad; it’s that the feeling is so overwhelming they don’t know what to do with that. They’re born with anger issues.

Part of your job as a parent is to teach the child to identify when they’re entering into these angry phases so that they can stop the process before it gets going. Say to him or her, “You look like you’re angry. Time to go kick the soccer ball around!” Give them an active way to blow off steam. But do identify the emotion, so that they can put a name to it (when I feel this way, I’m angry). It helps later on in life. So teach your child how to redirect those feelings.

I wouldn’t punish a child for acting out when they lose. I’d try these things first. Remember that a child is not an adult. They don’t yet know how to handle these strange emotions. And emotions, in and of themselves, are not bad. It’s what they do with them that matters. So teach them not to sulk and not to become violent. Teach them instead truth about who they are. Reward effort, not achievement. And teach them to redirect negative feelings.

And you just may find that you enjoy playing games as a family much more!

Has anyone in your family had issues with anger? Anyone a sore loser? How did you deal with it?