When you Don’t Discipline the Same Way

What do you do when you and your spouse discipline differently?

Yesterday we were talking about disciplining kids, and one of the most difficult parts of marriage is agreeing how to discipline. When one parent is more permissive, and one is more authoritarian, often parents fail to back each other up, and instead form emotional bonds with the kids. Here’s how it may typically play out:

Johnny and Jimmy are yelling at each other and hitting each other. Mom tells them to stop, and they laugh at her and keep knocking things over. She feels helpless and starts to tear up because they don’t listen to her.

Meanwhile Dad walks in. He sees Mom’s condition, takes one look at the boys who are acting up, and lets it all fly. He yells, sends everybody to their rooms, and threatens to ground them for at least a week.

Mom, who was upset at the boys, is now upset at Dad for overreacting. She just wants a peaceful home, and Dad has now guaranteed that everybody will be mad at everybody all night. Why can’t he stop yelling? So she goes into Johnny’s room and strokes his back as he cries, telling him that Daddy didn’t really mean it. “Daddy just gets mad sometimes,” she says. “You know what he’s like.”

Dad knows she’s doing this, but he doesn’t say anything. He just heads to the living room, plops on the couch, and turns on the TV. When she comes out of Johnny’s room, she sees him sulking, and gets even more mad herself. Now he’s being mean to her, when he should be apologizing!

That’s one scenario. Perhaps it’s the opposite in your house. Perhaps you’re the disciplinarian, and your husband is always joking with the kids, telling them they’re not really grounded, or trying to make them laugh when they’re supposed to be being punished.

Or here’s another situation, one that happened in our family recently. One of our daughters, who had been very compliant, hit puberty, and things started to really bother her. She’d even snarl at her sister sometimes, and become quite bossy and miserable. My husband handled it by becoming very firm. He didn’t want to put up with any of that and reinforce it, so it was better to nip it in the bud, he thought.

While on the whole I agreed with it, I also saw that sometimes when said daughter became upset she had legitimate reasons. But instead of trying to see those reasons, my husband reacted to everything the same way: punish her for sulking. For several months they were at loggerheads.

From my perspective, I was stuck in the middle. I saw when my husband was right and she was being unreasonable. But other times she was just upset and needed help working through something. But they both started digging in their heels, refusing to really communicate well with each other.

Finally I went out for a walk with my husband and just shared my heart. I didn’t blame him. I didn’t say “you are treating her all wrong.” I said, “I am scared that you aren’t connecting with her anymore.” (and he used to be closer than I was with her). “Why do you think that is?” We talked for a while, and then, when the opportunity was there, I told him that I thought that at times he was overreacting, and gave a recent example. He got defensive at first, but I asked him just to listen to me for a few minutes and agree to try to do things differently. And he did, and today they have a great relationship.

I should note, by the way, that there are other times when he has had to do the same with me. I remember about five years ago he had to sit me down and talk to me about how I wasn’t being firm enough with our other daughter. I disagreed. I thought he was too mean. But in retrospect, he was right, and after a while I took his advice to heart and did something about it.

The main lesson: as far as it depends upon you, do not get in the middle with a child and your spouse. Here’s some key pointers:

If you feel that your spouse is disciplining (or failing to discipline) appropriately, do not take this up with the children. Take it up with your husband afterwards, when the children are out of earshot. It is so important for kids to see their parents in agreement with one another, so that they know they cannot play you both against each other.

2. Never use your child as a sounding board for your disappointment in your spouse.

3. Talk to your spouse frequently about how you should discipline.

Discipline changes every 6 months or so as children age. What worked before may not work now, nor is it necessarily appropriate. And what worked great for one child might be disastrous when applied to the next. Have conversations when there are no major crises about what behaviour you should expect, and what appropriate consequences should be. 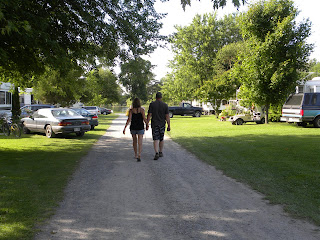 4. If you don’t agree with how your spouse is disciplining, talk to him at a time when there is no crisis.

Go for a walk. Go on a date night. Have breakfast on Saturday. Share some time when you also show him that you love him, so that you can really talk.

5. If you still don’t agree, and it’s a big issue, talk about it with a third party

Preferably this will be a mentor couple who has children older than yours, in to talk about discipline. Usually outside people can see problems, even when we think they can’t, and chances are couples would love to help you with this! Find a couple whose children you admire, and ask them to come and talk to you. But don’t ambush your hubby with this! Talk to hubby so that he agrees, and find a couple that you both agree on.

If you aren’t on the same page when it comes to discipline, ask yourself this: am I going to my children for emotional support? Am I undermining my husband in front of them (even if he is wrong?). If the answers to this are yes, you have some major changes to make. A family can’t function well if you are not a unit. Work at being a unit first, and then deal with the problem. Don’t think that his disciplining mistakes justify you undermining the relationship.

And remember: when you’re opposites on discipline, often a compensating effect happens, and you set up a good-cop bad-cop parenting style. That’s not healthy, either, and I’ve written about it here. Your marriage is super important–don’t endanger something your child desperately needs over different parenting styles.

Do you and your husband have different parenting styles? How did you handle it? Let me know in the comments!