Teaching is a Gift, Not a Profession

Last month, a board superintendent in Rhode Island fired all 100 teachers and administrators in one failing high school. The union had refused to agree to the conditions she wanted to improve the school (where only 3% of grade 11 students were proficient in Math), and so she fired the lot of them. (Unfortunately, she later relented when the union backed down, but for a few weeks there it looked like something drastic was actually going to be done!) 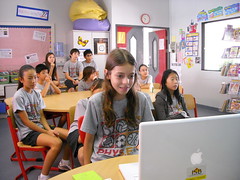 Many of us whine and complain about teachers–including me, and my kids aren’t even in the school system! But one of the issues that we perhaps fail to remember is that teaching is a gift, not a profession. We have made it into a profession, arguing that one has to have all this schooling to teach. Truthfully, though, all that schooling will not make someone a good teacher, any more than voice training will help someone who is tone deaf. You have to be able to teach in the first place. Education can make you better, but it cannot create a gift that isn’t there.

Often teachers and parents get into crosshairs, because parents complain about teachers and teachers complain that parents don’t back them up (often teachers have a major point here). But much of this rancour would disappear if we could just agree on terms: having a teaching job does not make one a teacher. It means you are being hired to teach; it doesn’t mean you can do it. And if teachers’ unions and boards of education would agree, then perhaps we could focus on people who actually COULD teach, rather than just people with a degree.

I am not saying that degree is useless, by the way; learning strategies to control a classroom or to teach to different learning styles is very useful. But it can’t replace natural giftings. And trusting our kids to people who can’t teach, or don’t want to teach, simply because they’re in a union is silly, and it’s an insult to those who really CAN teach who can’t get seniority because they’re too young or something.

Thomas Sowell also has a unique slant on teachers, which I think is true in the United States, though not quite so much in Canada where our standards for entrance to teachers’ colleges are higher. But here’s his argument:

Statistically, those who go into the education field have the lowest GPA of all the professions. They are not the brightest of the bright.

They are, however, the kind of people who enjoyed school. They had friends. They didn’t buck authority. They did reasonably well. They liked extracurricular activities. The kids who were busy with part-time jobs, or who were too smart for their own good, or who didn’t like authority, did not go into teaching. They started their own businesses, or got a more prestigious career.

What that adds up to is that teachers, by and large, are those who don’t question authority, who enjoy the collegial atmosphere of a school, and who aren’t the brightest of the bright. Obviously there are exceptions (and those exceptions probably are the gifted ones, who went in to teaching because of a higher calling), but in general this is true.

My experience bears this out. I can remember three teachers I had in my entire school life who were gifted and who made a difference. The rest were just filling time. My high school daughter, who is taking school online, is always correcting her chemistry teacher for errors. My nephew, in grade 9, had to argue with his math teacher about how to convert percentages to fractions.

I think parents and teachers would have much more respect for each other if we hired based on natural aptitude for teaching, rather than just whether or not someone had a teaching degree. I know tons of people who could teach well without necessarily having those credentials–in fact, perhaps they could teach better because they’ve been working in the real world for a while. If we had people who could truly teach, rather than just people who had the right letters after their name, our students would do much better.

And besides this, there’s a larger problem with public sector unions, both in the States and in Canada, being so entrenched that no major dents can be made. Public workers now earn more than private sector workers, and an economy cannot survive like that. I am not arguing that teaching should be paid less; only that if it’s being paid a lot, then we should at least demand performance and certain standards. We should be able to lay off teachers who can’t teach. And we should be able to shrink the public sector, if we have to, for the good of the economy.

And, for that matter, for the good of the children. Apparently one Los Angeles school board has given up trying to fire incompetent teachers after spending $3.5 million dollars trying to get rid of 7–and only succeeding in getting rid of 4. The teachers’ unions are so strong that nothing can be done to get rid of incompetent teachers who are stealing a year of education from children’s lives.

At some point in the near future all of this is going to collapse. Our schools–and especially our school districts, with all the administrators–are bloated. Our government is bloated. And we’re not getting what we pay for.

If we demanded results, like they did in the private sector, things could be fixed. But they won’t be until the teachers’ unions and the public sector unions lose some of their power. And I have absolutely no idea how that is ever going to come about.